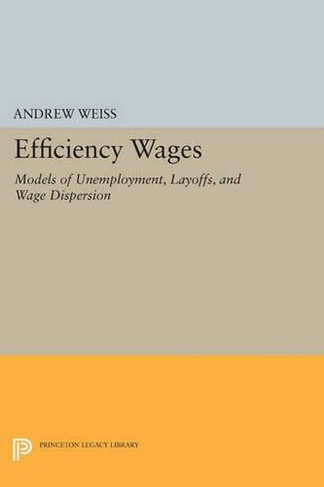 Known for his seminal work in efficiency-wage theory, Andrew Weiss surveys recent research in the field and presents new results. He shows how wage schedules affect the kinds of workers a firm employs and how well those workers perform on the job. Using straightforward examples, he demonstrates how efficiency-wage theory can explain labor market outcomes and guide government policy. There is a separate section of applications to less developed countries. "Efficiency-wage models represent one of the most important developments in economic theory of recent years. They have, at last, provided integrated explanations both of macroeconomic phenomena, such as unemployment and wage rigidity, and microeconomic phenomena, such as wage dispersion. Weiss--one of the pioneers of efficiency-wage theory--provides here a masterful survey, a lucid and systematic and yet critical account of this rapidly developing branch of economics. This book should be required reading in all courses in macroeconomics."--Joseph Stiglitz, Stanford University "Efficiency Wages should be on the bookshelf of all labor and macroeconomists."--Lawrence H. Summers, Harvard University "A splendid monograph ...most readable. ..I will put it on my reading list."--Partha Dasgupta, Stanford University Originally published in 1991. The Princeton Legacy Library uses the latest print-on-demand technology to again make available previously out-of-print books from the distinguished backlist of Princeton University Press. These editions preserve the original texts of these important books while presenting them in durable paperback and hardcover editions. The goal of the Princeton Legacy Library is to vastly increase access to the rich scholarly heritage found in the thousands of books published by Princeton University Press since its founding in 1905.