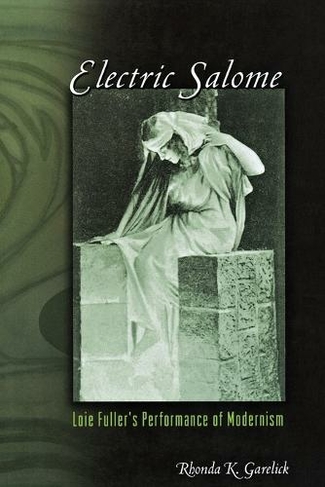 Loie Fuller was the most famous American in Europe throughout the late nineteenth and early twentieth centuries. Rising from a small-time vaudeville career in the States, she attained international celebrity as a dancer, inventor, impresario, and one of the first women filmmakers in the world. Fuller befriended royalty and inspired artists such as Mallarme, Toulouse-Lautrec, Rodin, Sarah Bernhardt, and Isadora Duncan. Today, though, she is remembered mainly as an untutored "pioneer" of modern dance and stage technology, the "electricity fairy" who created a sensation onstage whirling under colored spotlights. But in Rhonda Garelick's Electric Salome, Fuller finally receives her due as a major artist whose work helped lay a foundation for all modernist performance to come. The book demonstrates that Fuller was not a mere entertainer or precursor, but an artist of great psychological, emotional, and sexual expressiveness whose work illuminates the centrality of dance to modernism. Electric Salome places Fuller in the context of classical and modern ballet, Art Nouveau, Orientalism, surrealism, the birth of cinema, American modern dance, and European drama. It offers detailed close readings of texts and performances, situated within broader historical, cultural, and theoretical frameworks. Accessibly written, the book also recounts the human story of how an obscure, uneducated woman from the dustbowl of the American Midwest moved to Paris, became a star, and lived openly for decades as a lesbian. 44 halftones. 2 line illus.

Rhonda K. Garelick is professor in the department of English and at the Hixson-Lied School of Fine and Performing Arts at the University of Nebraska-Lincoln. She is the author of "Rising Star: Dandyism, Gender, and Performance in the Fin-de-Siecle" (Princeton).