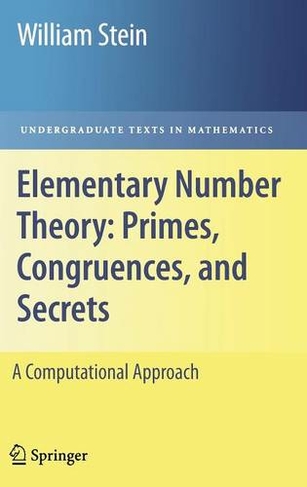 By William Stein (Author)
Hardback
https://www.whsmith.co.uk/products/elementary-number-theory-primes-congruences-and-secrets-a-computational-approach-1st-edition-2nd-pri/william-stein/hardback/9780387855240-12-000.html £40.49 rrp £44.99 Save £4.50 (10%)
GBP
Availability
In Stock
With Free Standard Delivery To Your Home Or Store
Details
Spend £25 on eligible products to receive free standard delivery to home or free next working day click and collect to store
Share

This is a book about prime numbers, congruences, secret messages, and elliptic curves that you can read cover to cover. It grew out of undergr- uate courses that the author taught at Harvard, UC San Diego, and the University of Washington. The systematic study of number theory was initiated around 300B. C. when Euclid proved that there are in?nitely many prime numbers, and also cleverly deduced the fundamental theorem of arithmetic, which asserts that every positive integer factors uniquely as a product of primes. Over a thousand years later (around 972A. D. ) Arab mathematicians formulated the congruent number problem that asks for a way to decide whether or not a given positive integer n is the area of a right triangle, all three of whose sides are rational numbers. Then another thousand years later (in 1976), Di?e and Hellman introduced the ?rst ever public-key cryptosystem, which enabled two people to communicate secretely over a public communications channel with no predetermined secret; this invention and the ones that followed it revolutionized the world of digital communication. In the 1980s and 1990s, elliptic curves revolutionized number theory, providing striking new insights into the congruent number problem, primality testing, publ- key cryptography, attacks on public-key systems, and playing a central role in Andrew Wiles' resolution of Fermat's Last Theorem. 45 Illustrations, black and white; X, 168 p. 45 illus.