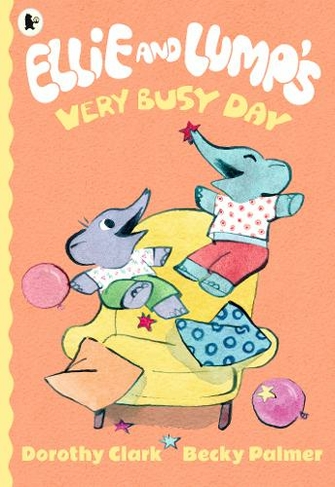 Join Ellie and Lump - two toddler elephants - on their very busy (very noisy) day! In this big-hearted and bouncy read-aloud story about a special day in the life of two adorable elephants, Ellie and Lump are bubbling with energy from the moment they wake up - they're just ready to explode! There's a lot to do: boing-boing-bouncing on beds, split-splatting eggs for breakfast, whizz-whooshing around on supermarket trollies and blowing up balloons. They're planning a big birthday surprise ... but who is it for? Illustrator Becky Palmer captures the joy and excitement of a day out with mum and the thrills of planning a party, while the read-aloud text with wonderfully rhythmical sound effects makes this a fizzy first reading experience perfect for sharing with toddlers.

Dorothy Clark left art school just after the Second World War beginning work as an illustrator in an advertising studio. As a change from her day job, she would make Christmas card designs for the Gordon Fraser Gallery. But her break into the children's publishing world began as the artist on a series of cloth books about Rupert Bear and friends. After a chance meeting with the assistant editor of Nursery World magazine on an Italian holiday, Dorothy would provide column fillers for the publication for years and years to come. Her picture book Grandpa's Handerkerchief, illustrated by Siobhan Dodds, was shortlisted for the Smarties Prize. Dorothy lives in Beaconsfield. Ellie and Lump's Very Busy Day is her debut on the Walker picture books list.Becky Palmer is an illustrator, author and comics artist. She graduated from the Cambridge School of Art with an MA in Illustration in 2012, and was awarded the inaugural Sebastian Walker prize. Since then, she has continued to work on narrative projects as an illustrator, alongside further postgraduate study into picture books and comics. She lives in the wilds of Herefordshire and teaches illustration at the University of Worcester. Find Becky online at beckypalmer.co.uk.