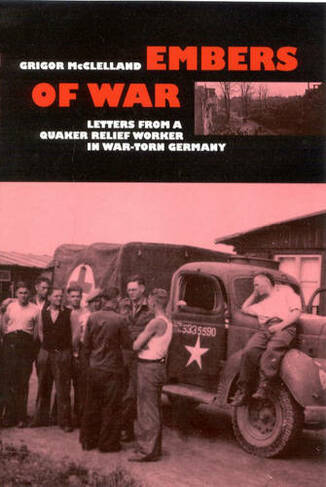 Embers of War: Letters from a Relief Worker in the British Zone of Germany, 1945-46

Grigor McClelland served as a Quaker relief worker in British-occupied Germany between May 1945 and June 1946, working first for "Displaced Persons" who had been brought to work in Germany during the war and stranded there. These were mainly Russians and Poles, but also people from most of the other countries of Europe, often perplexed as to whether they could or should return home. From December 1945 McClelland and his team transferred to work on the problems of the German population in part of the Ruhr. They distributed food and other supplies, helped German welfare and youth organizations to start again, and liaised closely with the British Military Government and with the new civilian administration, working cheek by jowl with the Swedish and Swiss agencies. The team had entered Germany whilst General Montgomery's "non-fraternization" order was in force, but soon their lives mingled with those of Germans, they sat up late at night with them, discussing religion, politics, literature and art, and developed some lasting friendships. McClelland met many survivors of Nazi concentration camps and visited two camps run by the British for Nazis and suspected Nazis. He heard Pastor Martin Niemoeller talk about the Guilt Question to a hostile audience of Westphalian pastors, and visited the War Crimes Trial at Nuremberg. He and his fellow workers were addressed by General Montgomery, and met the saintly pacifist, Pastor Wilhelm Mensching, and his congregation. The letters in this book, which were written by McClelland during those 13 months in Germany, provide a day-by-day account of the relief team's life and work, the conditions they tackled and the people they met. illustrations