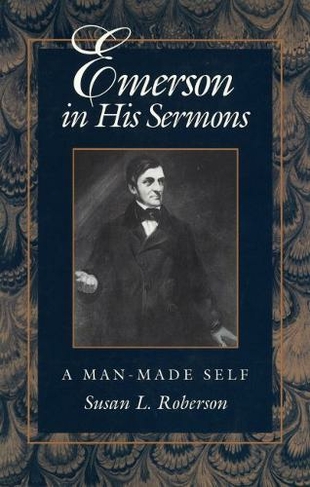 Emerson in His Sermons: A Man-made Self

Ralph Waldo Emerson is universally recognized as one of America's most influential authors and thinkers. Before achieving eminence as lecturer, essayist, and poet, though, he was a Unitaarian preacher. Emerson in His Sermons is the first major study of the sermons since the publication of The Complete Sermons of Ralph Waldo Emerson. Susan Roberson examines Emerson's ministerial career from 1826 to 1832, shedding new light on those early, crucial years in Emerson's personal and intellectual development. Treating the sermons extensively as an autobiographical text, Roberson establishes that Emerson's years in the pulpit were pivotal and that his sermons are key texts in revealing the essential development of his thought. Central to Roberson's explication of the sermons is Emerson's conception of self-reliance, his invention of a new hero for a new age, and his merging of his own identity with that heroic idea. Roberson focuses on Emerson's reaction to what was perhaps the most signifcant event in his personal life: the death of his young wife, Ellen, of tuberculosis in 1831, after only sixteen months of marriage. Roberson's correlation of the sermons written during that time with the complexity of Emerson's emotional and intellectual response to the tragedy of Ellen's illness and death is the most detailed and sophisticated treatment of that material to date. Roberson understands Emerson's emergence from the ministry as his rejection of ready-made institutions and sytems of thought. Through her careful readings of the sermons, Roberson finds that Emerson's objective was less the translation of his life into writing than the translation of his life through writing. By considering the sermons in this way, Roberson is able to enrich our understanding of the private and passionte impulses of this seminal thinker. Emerson in His Sermons offers the first real look at how the sermons fit into Emerson's own development and will have a far-reaching impact on Emerson scholarship. Anyone concerned with the cultural and religious history of America will find this book invaluable. bibliography, index

Susan L. Roberson teaches in the English Department at Auburn University in Alabama.