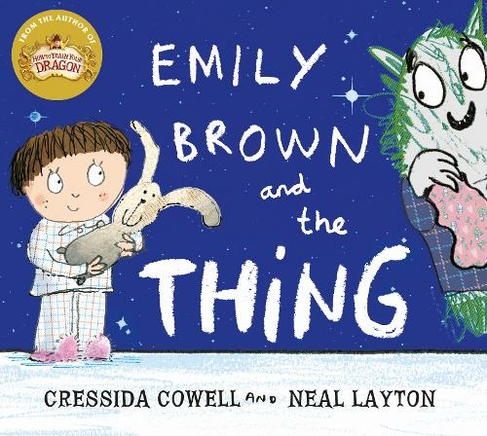 A classic Emily Brown bedtime story about being scared of the dark. From Children's Laureate, Cressida Cowell. Emily Brown and her rabbit, Stanley, are trying to sleep. But a Splish-Splosh noise is keeping them awake... It's a Thing! And this Thing just won't go to sleep. Emily Brown and Rabbit try everything, but nothing works. Just what could be the matter? This warm and witty picture book is perfect for sharing with children who may be afraid of the dark. With a gentle message that things are never quite as scary as they first seem. "It's funny, it's got twists and turns, and shows us, among other things, that we can spend too much time nurturing our fears rather than trying to conquer them." The Guardian

Cressida Cowell is currently the Waterstones Children's Laureate (2019 - 2021). She is the author and illustrator of the bestselling The Wizards of Once and How to Train Your Dragon books series, and the author of the Emily Brown picture books, illustrated by Neal Layton. The Wizards of Once series has been translated into 38 languages and has been signed by DreamWorks Animation. How to Train Your Dragon has sold over 8 million books worldwide in 38 languages and is a major DreamWorks Animation film franchise, as well as being made into a TV series on Netflix and CBBC. Cressida is an ambassador for the National Literacy Trust and the Reading Agency, a Trustee of World Book Day and a founder patron of the Children's Media Foundation. She has won numerous prizes, including the Gold Award in the Nestle Children's Book Prize. Neal is an award-winning illustrator and author of children's books. He has worked on more than 80 titles to date, working with authors such Cressida Cowell and Michael Rosen, and won several prizes including a Gold Award in the Nestle Children's Book Prize for That Rabbit Belongs to Emily Brown. His books have also been shortlisted for the Red House Book Awards, the Blue Peter Book Awards, the Booktrust Early Years Award, Funfzig Jahre Deutcher Jugendliteraturpreis and New York Public Library's annual list of Best Children's Books.He also writes his own books, such as eco-picture book A Planet Full of Plastic and 'The Invincible Tony Spears' fiction series. His books are currently in print in more than 16 languages worldwide. He lives in Portsmouth with his wife and two daughters.