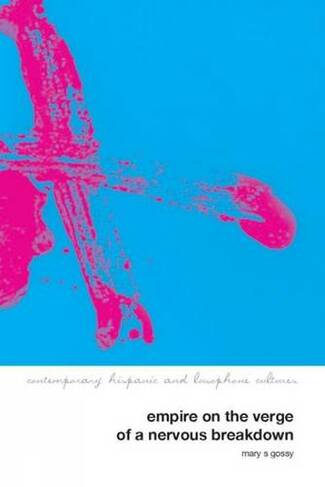 Empire on the Verge of a Nervous Breakdown: (Contemporary Hispanic and Lusophone Cultures 2)

By Mary S. Gossy (Author)
Hardback
https://www.whsmith.co.uk/products/empire-on-the-verge-of-a-nervous-breakdown-contemporary-hispanic-and-lusophone-cultures-2/mary-s-gossy/hardback/9781846311826-01-000.html £85.00
GBP
Availability
Currently unavailable. We don't know when or if this item will be back in stock
With Free Saver Delivery
Details
FREE SHIPPING over £20 for Saver Delivery
Share

Literature gives access to the "verge," to the place where the full terror of falling is felt, and yet both feet are still on the ground. Empire on the Verge of a Nervous Breakdown offers pleasurable instruction to readers who want to know and feel their ways through and beyond disciplinary conventions towards new and clearer understandings of how empires and texts shiver and fall, and why. Literature makes a difference to the ways that these questions are asked and explored. A cavalcade of writers-among them Edward Gibbon, Edgar Allan Poe, James Joyce, Sigmund Freud, the Wolf-Man, Gertrude Stein, Monique Wittig, Jeanette Winterson, Monty Python and even Miguel de Cervantes and A. Conan Doyle-- have written about empire, femininity, Spain, pain, wounds, war and love. Symptoms of imperial panic abound in their pages, very frequently manifesting directly or indirectly in allusions to Spain and things Spanish. Here female or feminized bodies often bear the brunt of any acting-out. In these highly original and highly engaging essays the reader confronts verges of cliffs, madness, window ledges, rooftops; verges of virgins and whores, slippery slopes and razor's edges. Gossy argues that masculinity and femininity are always on the verge of slipping away from what they are supposed to be, and of dragging fantasies of imperial domination over the edge with them. The Spain of lost empire accompanies these acute symptoms of anxiety, even in texts and authors where-as in Monty Python's version of the Spanish Inquisition-no one expects it.