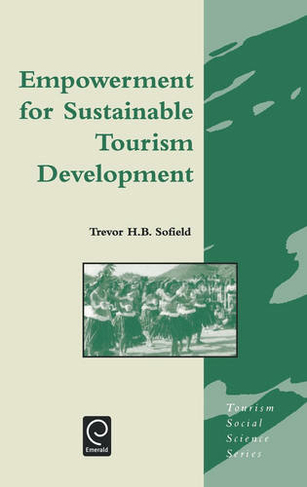 Aiming to explore theoretical advances in tourism studies, this book explores the triadic relationship between tourism, sustainable development and empowerment. While tourism has begun to focus on community consultations, the process has tended to follow the path of development for communities rather than development by communities. In many cases the result has been disempowerment rather than empowerment. This study goes beyond a focus on the impacts of tourism to explore the relevance of a body of political, economic, sociological, anthropological and development theory to formulate a synthesized construct of empowerment which provides a useful standpoint to consider the community/tourism development relationship. The approach that has been adopted also attempts to combine the emic paradigm with the etic, that is one which relies upon an actor-oriented "inside" view of the meaning of the behaviour under study as well as upon externally constructed models by "outsider" researchers to describe the social situation. The theoretical framework of empowerment which is proposed for community based tourism development is explored across three levels through five case studies drawn from the South Pacific. The first level is regional and looks at the community of South Pacific island states and their endeavors to formulate a regional response to tourism development, a case of pseudo empowerment. The second is national and looks at how one country responded to the challenges of tourism development through a comprehensive policy framework to advance indigenous community interests but despite which fails the test of empowerment. The third is at the local level and examines three communities: one which represents an example of complete failure because of disempowerment (Solomon Islands); one which provides an example of successful cultural tourism development controlled by the community itself through empowerment (Vanuatu); and one which represents successful adaptation to a partnership between a foreign investor and the local land-owning community, resulting in sustainable resort development through empowerment (Fiji).