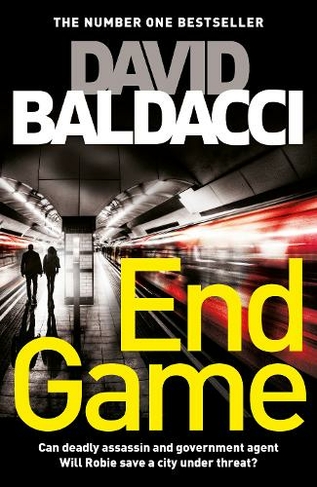 By David Baldacci (Author)
Hardback
End Game (Will Robie series) is rated 5.0 out of 5 by 1.
https://www.whsmith.co.uk/products/end-game-will-robie-series/david-baldacci/hardback/9781447277408-12-000.html £18.99
GBP
Availability
In Stock
Free Saver Delivery on orders over £25
Details
FREE SHIPPING over £25 for Saver Delivery
Share

End Game is the fifth book in the thrilling Will Robie series by international number one bestselling author David Baldacci. Will Robie, highly trained assassin and the US government's most indispensable asset, is called to London. An imminent terrorist attack threatens the Underground and with the US next in line, Robie is the perfect choice to stop it before it begins. He knows he has one chance to succeed. One chance to save London. One chance to make it safely home to find out what has happened to fellow agent Jessica Reel following their last deadly mission together. But Robie is about to learn that even if he succeeds, the worst is yet to come. The game has started. Now only he can end it . . .

David Baldacci is one of the world's bestselling and favourite thriller writers. With over 130 million copies in print, his books are published in over 80 territories and 45 languages, and have been adapted for both feature-film and television. He has established links to government sources, giving his books added authenticity. David is also the co-founder, along with his wife, of the Wish You Well Foundation (R), a non-profit organization dedicated to supporting literacy efforts across the US.Trust him to take you to the action.