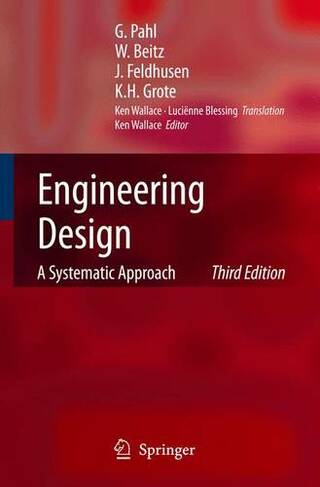 This proven and internationally recognized text teaches the methods of engineering design as a condition of successful product development. It breaks down the design process into phases and then into distinct steps, each with its own working methods. The book provides more examples of product development; it also tightens the scientific bases of its design ideas with new solution fields in composite components, building methods, mechatronics and adaptronics. The economics of design and development are covered and electronic design process technology integrated into its methods. The book is sharply written and well-illustrated. XXI, 617 p.

Dr.Ing. Gerhard Pahl graduated from the Technical College of Darmstadt in 1954 and spent the next 10 years involved with the initial start-up, construction and development of turbomachines with Brown, Boveri and Cie. During the years between 1965 and 1990, Dr.Ing. Pahl was professor for Mechanical Components and Engineering Design at the Technical College of Darmstadt. He was vice-president of the German Research Foundation from 1978 to 1984 and is a member of the Berlin Berlin-Brandenburg Academy of Sciences.Dr.Ing. Joerg Feldhusen graduated from the Technical University of Berlin in 1989. Between 1989 and 1994 he was the department head of Electronic Design at AEG Westinghouse Transportation Systems, Berlin. He then went on to become head of design and development of the Duewag railway vehicle manufacturing company, Duesseldorf, followed by technical manager of Siemens Light Rail, Dusseldorf and Erlangen. In 1999 he was made professor for Engineering Design and in 2000 director of the Institute for General Mechanical Engineering Design Technology of the Technical College of Rhineland-Westphalia in Aachen.Dr.Ing. Karl Grote graduated from DO Berlin in 1984 and then studied for his Postdoc in the USA. In 1990 he became professor at the California State University, Long Beach, USA, before moving to the OvG Univ. Magdeburg in 1995. From October 2002 to September 2004 he was a visiting professor at the Engineering Design Research Laboratory of Professor Erik Antonsson, CalTech, Pasadena, USA.