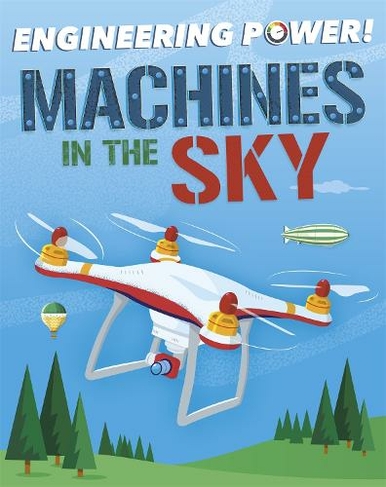 From hot air balloons to supersonic jet, drones and jetpacks, explore the world of flying machines! Get to grips with the mind-boggling advances that have been made in engineering and building aircraft. Bright and bold artwork, alongside clear explanations and diagrams, guide you through a variety of landmark or forward-thinking machines. From cranes, submarines, tanks, and stealth jets, find out how machines have been built to lift heavy weights, be submerged in deep oceans, roll forward over rough terrain and zip quietly past in the sky overhead. The books in the Engineering Power series explain how the most amazing machines in our world operate, pulling out key engineering detail to inform and inspire the next generation of engineers. Perfect for readers aged 9 and up.

Kay Barnham was born in Barrow-in-Furness, grew up in Carlisle, went to college in Brighton, and lived in Hove for a while, before sailing for Kinsale, Co Cork, popping back to Hove and then moving to the New Forest with her husband and daughter. And never at any point has she lived more than ten miles from the sea. She began working in children's publishing in 1992. She was an editor first of all, working on illustrated non-fiction and learning fun facts like how long it would take to walk to the moon - nine years - and how to spell palaeontology. Next, she commissioned fiction titles, editing picture books, storybooks and novels. And then she got the chance to write her own books, which she thinks is quite the best job ever. Except possibly being a chocolatier. She writes non-fiction as Kay Barnham. Her specialist subjects include ice-skating, Isambard Kingdom Brunel, lightning, fairies, Roald Dahl, Sir Isaac Newton, Christmas, dolphins, Florence Nightingale and very bad cracker jokes. And chocolate. She also writes fiction as Kay Woodward, including the Skate School series for Usborne and the novels Jane Airhead and Wuthering Hearts for Andersen Press. Altogether, she's written about a hundred books. Her favourite colour is navy blue. Her favourite chocolate is 85% cocoa solids.