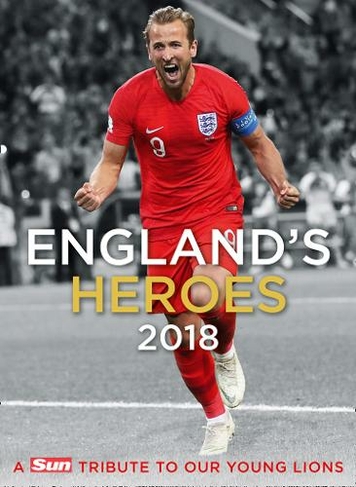 England's Heroes: A Tribute to Our Young Lions

Hardback
https://www.whsmith.co.uk/products/englands-heroes-a-tribute-to-our-young-lions/hardback/9780008322076-12-000.html £11.99 rrp £14.99 Save £3.00 (20%)
GBP
Availability
In Stock
Free Delivery Available When You Spend £25 Or More
Details
Spend £25 On Eligible Products To Receive Free Standard Delivery To You Home Or Free Next Working Day Click And Collect To Store
Share

Published in partnership with The Sun, and packed with stunning photographs, this fully illustrated book will be a celebration and fantastic tribute to the extraordinary achievements of Gareth Southgate, Harry Kane and the young lions that represented us so proudly in Russia. England's Heroes charts the extraordinary turnaround in the fortunes of the nation's football team, starting with Gareth Southgate's surprise appointment, a difficult qualifying campaign, and a public seemingly uninterested in the fortunes of a young group of 'no hopers' who turned into an England team who became genuine challengers for the World Cup. Featuring new biographies of the entire squad and manager, full length match reports and entertaining features throughout, including THAT shoot-out victory against Colombia - putting to bed years of hurt - only to end in the crushing disappointment of losing to Croatia in the semi-final, this book is a souvenir and memento of one of the most compelling summers in British sporting history. Written by the Sun team who have been ever-present within the England camp, experiencing the highs and lows of our greatest World Cup performance for nearly thirty years, England's Heroes celebrates an England united in hope and proud in defeat. 100 col illus