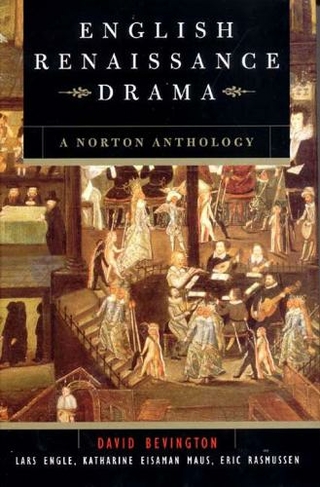 Popular in their own time, the 27 plays included here-by Christopher Marlowe, Ben Jonson, John Webster, Thomas Middleton, among many others-reveal why these playwrights' achievements, like Shakespeare's, deserve reading, teaching, and performing afresh in our time. Edited by a team of exceptional scholars and teachers, this anthology opens an extraordinary tradition in drama to new readers and audiences.

David Bevington (Ph.D. Harvard) is Professor Emeritus of English and of Comparative Literature and Phyllis Fay Horton Distinguished Service Professor in the Humanities at The University of Chicago. His studies include From "Mankind" to Marlowe; Tudor Drama and Politics; Action is Eloquence: Shakespeare's Language of Gesture; Shakespeare: The Seven Ages of Human Experience; This Wide and Universal Theatre: Shakespeare in Performance Then and Now; Shakespeare's Ideas: More Things in Heaven and Earth; Shakespeare and Biography; and Murder Most Foul: Hamlet Through the Ages. He is the editor of Medieval Drama; The Bantam Shakespeare, in twenty-nine paperback volumes; and The Complete Works of Shakespeare; as well as the Oxford 1 Henry IV, the Cambridge Antony and Cleopatra, and the Arden Troilus and Cressida. He has done critical editions of John Lyly's Sappho and Phao, Endymion, and Midas for the Revels Plays. With Peter Holbrook he co-edited The Politics of the Stuart Court Masque. He is the senior editor of the Revels Student Editions, and is a senior editor of the Revels Plays and of the Cambridge edition of the works of Ben Jonson. He has received the Phi Beta Kappa Book Prize from the University of Virginia, the Quantrell Teaching Award at the University of Chicago, and two Guggenheim Fellowships. Lars Engle (Ph.D. Yale) is James G. Watson Professor of English at the University of Tulsa, where he has chaired English, directed Honors, and won the University Outstanding Teacher Award and the College Excellence in Teaching Prize. He also teaches at Bread Loaf, held a Mellon Fellowship at the Center for Advanced Studies at Virginia, and won the Heyman Prize for Outstanding Work in the Humanities at Yale. A former Trustee of the Shakespeare Association of America, he is the author of Shakespearean Pragmatism: Market of His Time and, with Eric Rasmussen, of Studying Shakespeare's Contemporaries. Katharine Eisaman Maus (Ph.D. Johns Hopkins) is James Branch Cabell Professor of English at the University of Virginia. She is the author of Being and Having in Shakespeare; Inwardness and Theater in the English Renaissance; and Ben Jonson and the Roman Frame of Mind; editor of a volume of Renaissance tragedies; and coeditor of English Renaissance Drama: A Norton Anthology, The Norton Anthology of English Literature, and a collection of criticism on seventeenth-century English poetry. She has been awarded Guggenheim, Leverhulme, NEH, and ACLS fellowships, and the Roland Bainton Prize for Inwardness and Theater. Eric Rasmussen (Ph.D. Chicago) is Foundation Professor and Chair of English at the University of Nevada. He is co-editor of the Royal Shakespeare Company's Complete Works of William Shakespeare and of William Shakespeare and Others: Collaborative Plays. He has received a National Endowment for the Humanities Research Grant for the New Variorum Hamlet, the Mousel-Feltner Research Award, and the Jacob K. Javits Fellowship in the Humanities. Professor Rasmussen is the author of A Textual Companion to "Doctor Faustus" and co-editor of Doctor Faustus A- and B-Texts (Revels Plays), Christopher Marlowe: Doctor Faustus and Other Plays (World's Classics), the forthcoming New Variorum Hamlet, and King Henry VI, Part 3 (the Arden Shakespeare Third Series). He writes the annual review of "Editions and Textual Studies" for Shakespeare Survey.