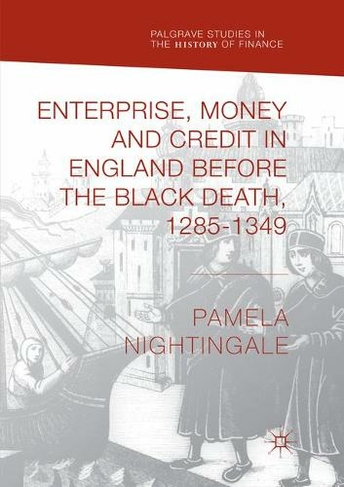 Enterprise, Money and Credit in England before the Black Death 1285-1349 Softcover reprint of the original 1st ed. 2018

This book charts the contributions made to the development of the late medieval English economy by enterprise, money, and credit in a period which saw its major export trade in wool, which earned most of its money-supply, suffer from prolonged periods of warfare, high taxation, adverse weather, and mortality of sheep. Consequently, the economy suffered from severe shortages of coin, as well as from internal political conflicts, before the plague of 1348-9 halved the population. The book examines from the Statute Merchant certificates of debt, the extent to which credit, which normally reflects economic activity, was affected by these events, and the extent to which London, and the leading counties were affected differently by them. The analysis covers the entire kingdom, decade by decade, and thereby contributes to the controversy whether over-population or shortage of coin most inhibited its development. 2 Tables, color; 1 Illustrations, color; 3 Illustrations, black and white; XVIII, 382 p. 4 illus., 1 illus. in color.

Pamela Nightingale read history at Newnham College, Cambridge, where she stayed to do research for a Ph.D. which she was awarded in 1963. Her first three books were on the history of British India and Chinese Central Asia from the eighteenth to the twentieth centuries, until she changed her field to write a book on the trade and politics of medieval London. Her research led her to investigate and then to calendar the huge collection of certificates of debt in the National Archives on which this present book is based. Her publications, two Senior Research Fellowships held at the Ashmolean Museum, and regular participation in an Oxford research seminar on medieval economic and social history led to her election in 1999 as a member of Oxford University's Faculty of History, and in 2010 she was awarded an Oxford D.Litt. She is also a Fellow of the Royal Historical Society.