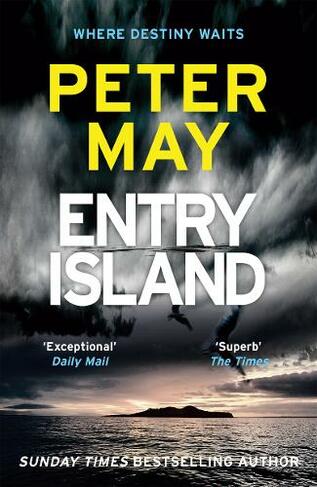 By Peter May (Author)
Paperback
https://www.whsmith.co.uk/products/entry-island/peter-may/paperback/9781782062233-12-000.html £7.37 rrp £8.99 Save £1.62 (18%)
GBP
Availability
In Stock
Free Delivery Available When You Spend £15 Or More
Details
Spend £15 On Eligible Products To Receive Free Standard Delivery To You Home Or Free Next Working Day Click And Collect To Store
Share

WINNER: DEANSTON SCOTTISH CRIME BOOK OF THE YEAR 2014 WINNER: ITV SPECSAVERS CRIME THRILLER BOOK CLUB BEST READ OF THE YEAR 2014 'A wonderfully complex book' PETER JAMES A detective is haunted by the feeling he knows his murder suspect - despite the fact they have never met. IF YOU FLEE FATE... When Detective Sime Mackenzie is sent from Montreal to investigate a murder on the remote Entry Island, 850 miles from the Canadian mainland, he leaves behind him a life of sleeplessness and regret. FATE WILL FIND YOU... But what had initially seemed an open-and-shut case takes on a disturbing dimension when he meets the prime suspect, the victim's wife, and is convinced that he knows her - even though they have never met. And when his insomnia becomes punctuated by dreams of a distant Scottish past in another century, this murder in the Gulf of St. Lawrence leads him down a path he could never have foreseen, forcing him to face a conflict between his professional duty and his personal destiny. LOVED ENTRY ISLAND? Read the first book in Peter May's acclaimed China thrillers series, THE FIREMAKER LOVE PETER MAY? Buy his new thriller, A SILENT DEATH

Peter May was an award-winning journalist at the age of just twenty-one. He left newspapers for television and screenwriting, creating three prime-time British drama series and accruing more than 1,000 television credits. Peter now lives in France where he focuses on writing novels.