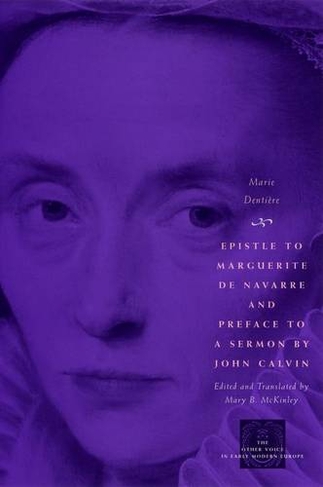 Born to a noble family in Tournai, Marie Dentiere (1495-1561) left her convent in the 1520s to work for religious reform. She married a former priest and with her husband went to Switzerland, where she was active in the Reformation's takeover of Geneva. Dentiere's Very Useful Epistle (1539) is the first explicit statement of reformed theology by a woman to appear in French. Addressed to Queen Marguerite of Navarre, sister of the French king Francis I, the Epistle asks the queen to help those persecuted for their religious beliefs. Dentiere offers a stirring defense of women and asserts their right to teach the word of God in public. In the Epistle, she also defends John Calvin against his enemies and attacks the hierarchy of the Roman Catholic Church. Her Preface (1561) to one of Calvin's sermons criticizes immodesty and extravagance in clothing and warns the faithful to be vigilant. Undaunted in the face of suppression and ridicule, this outspoken woman persisted as an active voice in the Reformation.

Mary B. McKinley is the Douglas Huntly Gordon Professor of French at the University of Virginia. She is the author of Words in a Corner: Studies in Montaigne's Latin Quotations and Les terrains vagues des "Essais": Itineraires et intertextes.