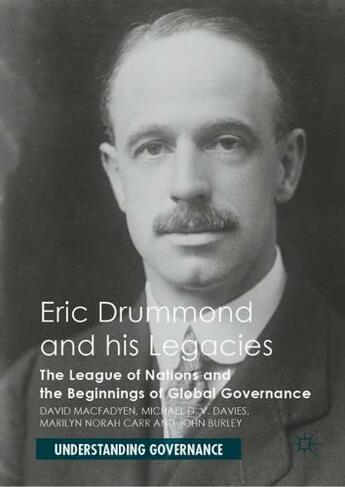 Eric Drummond and his Legacies: The League of Nations and the Beginnings of Global Governance (Understanding Governance 1st ed. 2019)

This book shows how the first institution of global governance was conceived and operated. It provides a new assessment of its architect, Eric Drummond, the first Secretary-General of the League of Nations, appointed a century ago. The authors conclude that he stands in the front rank of the 12 men who have occupied the post of Secretary-General of the League or its successor, the UN. Part 1 describes his character and leadership. His influence in shaping the International Civil Service, the 'beating heart' of the League, is the subject of Part 2, which also shows how the young staff he appointed responded with imagination and creativity to the political, economic and social problems that followed World War I. Part 3 shows the influence of these early origins on today's global organizations and the large scale absorption of League policies, programmes, practices and staff into the UN and its Specialized Agencies. 6 Tables, color; 8 Illustrations, color; 9 Illustrations, black and white; XXIX, 361 p. 17 illus., 8 illus. in color.

David Macfadyen is Fellow of the Royal College of Physicians of Edinburgh, UK, and has worked at a senior level in the World Health Organization (WHO). His research interests include the History of Medicine, which he has studied at the University of Glasgow, UK. Michael Davies is a former staff member of the Food and Agriculture Organization (FAO) and the Inter-American Development Bank. He is the author of International Organizations: A Companion and The Administration of International Organizations.Marilyn Carr has worked for the UN Economic Commission for Africa and the UN Development Fund for Women. She studied Development Economics at the University of Sussex, UK, and is the author of many books and articles on science, technology and women's economic empowerment.John Burley was an economic adviser to the Government of Uganda before working for the UN, including the UN Development Programme (UNDP). He was a Director at the UN Conference for Trade and Development and has contributed to a number of published studies of the UN system.