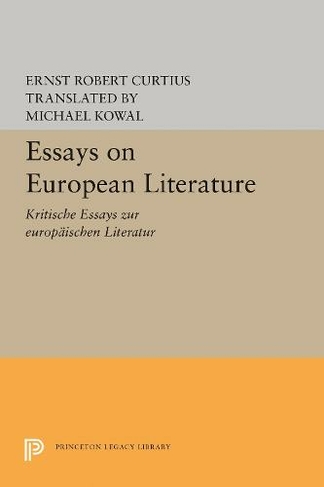 Although the reputation of the great German scholar Ernst Robert Curtius was firmly established for English and American readers by the translation of European Literature and the Latin Middle Ages, much of his work is still unknown to them. These twenty-four essays, written over a period of nearly thirty years, range widely in time and scope and consider some of the greatest figures in European literature, among them Virgil, Goethe, Balzac, Joyce, Eliot, Ortega y Gasset, and Hesse. The essays show the qualities that made Curtius one of the great critics of our age: his lucid, penetrating mind, his comprehensive erudition, his cosmopolitan outlook, and above all his passionate concern for European culture. Like T. S. Eliot, the subject of one of his finest essays, Curtius believed in an ideal order, a cultural unity of the West. The unifying element in all these essays is a concern to insure the conservation and continuance of European humanistic culture. For him this culture consisted of the literary heritage of Greece and Rome, developed and enriched by the Christian civilization of the Middle Ages. Consequently he selected for discussion those poets and writers who have been conscious of the unity of these two European currents and who have striven to maintain it in our time. As he ranged freely through the languages and literatures of all Western cultures, Curtius himself did much to preserve this tradition, to demonstrate its relevance, and insure its continuity. Originally published in 1973. The Princeton Legacy Library uses the latest print-on-demand technology to again make available previously out-of-print books from the distinguished backlist of Princeton University Press. These editions preserve the original texts of these important books while presenting them in durable paperback and hardcover editions. The goal of the Princeton Legacy Library is to vastly increase access to the rich scholarly heritage found in the thousands of books published by Princeton University Press since its founding in 1905.