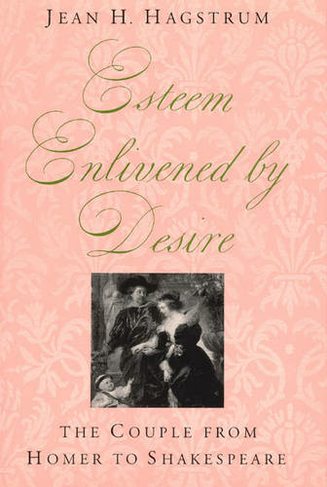 A magisterial book by one of our most distinguished literary historians, Esteem Enlivened by Desire illuminates (and celebrates) the ideal of lasting love from antiquity to the high Renaissance. Love that leads to marriage is a relatively recent "invention," or so critics and historians often say. But in this remarkable survey, Jean H. Hagstrum argues that long-term commitment formed of friendship and passion is one of Western culture's oldest and richest concepts. Hagstrum looks mainly at depictions of love in art and literature, works of the imagination that reflect social reality but also often transcend it to challenge restrictive codes and open up new possibilities for human nature. Among these possibilities, the association of esteem with sexual desire is one of the most invigorating that artists and thinkers have ever addressed. Tracing this motif through many different kinds of expression--from the Homeric epics, the Oresteia, Augustine's Confessions to the stories of Ovid, the Decameron, the plays and sonnets of Shakespeare--Hagstrum also illuminates a number of related themes, including other forms of relationship, from friendship to lust; marriage for political ends; liaisons with the same sex; and the presence of passion in religious commitment. The culmination of Hagstrum's long career, Esteem Enlivened by Desire offers generous insight into the amorous heritage of the West--and honors one of its most important, enduring, and hard-won achievements. 31 halftones