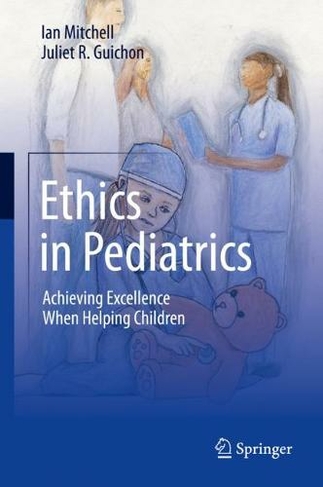 This book offers easy access to the everyday ethics problems that occur in the medical care of children. It contains practical guidance on how physicians and other healthcare practitioners may manage both straightforward and complex ethics problems. The book provides a readable and comprehensive introduction to ethics issues for beginners and is also extremely valuable to experienced practitioners.This work covers important "classical" ethical issues such as privacy, confidentiality, truth telling, and discusses the elements of the relationships that might exist between parents and healthcare providers. However, the book also provides a resource for new and emerging areas of bioethics. These include issues arising in the new population of children who are beginning to survive the neonatal and infant periods with a multitude of problems - "children with medical complexity". Finally, it also includes a section on the advantages and pitfalls of social media use. XXVII, 455 p.

Ian Mitchell received his medical education in Edinburgh, Scotland where he also had training in pediatrics, pediatric lung disease, and pediatric critical care. He has been involved in bioethics for over 30 years and earned a graduate degree in bioethics from the Medical College of Wisconsin. Dr. Mitchell has held leadership positions in bioethics at local and national levels including serving as Director, Office of Medical Bioethics, Faculty of Medicine, University of Calgary and as President, Canadian Bioethics Society. He has been a member of the Canadian Medical Association Committee on Ethics and the Canadian TriCouncil Panel on Research Ethics. He has held bioethics educational positions including Chair, Undergraduate Teaching in Bioethics; Course Lead, Introduction to Bioethics for University of Calgary Residents; and Co-Chair Ethics and Professionalism, Pediatric Residents, Alberta Children's Hospital. Dr. Mitchell has published extensively in pediatrics and bioethics, with approximately 200 peer reviewed articles, editorials and invited articles, book chapters and books. He has received many awards for ethics teaching and other awards including: the Community Service Award for work with parents whose child has died of sudden infant death syndrome, Faculty Association, University of Calgary, 2011; Vic Chernick Award for outstanding contributions to Pediatric Respirology in Canada, Assembly of Canadian Paediatric Respirologists, 2012; Canadian Medical Association, Dr William Marsden Award in Medical Ethics, 2013, which is awarded to individuals who have demonstrated exemplary leadership, commitment and dedication to the cause of advancing and promoting excellence in the field of medical ethics in Canada; for that award, he was cited as using "insight, innovation and fearlessness...". The Canadian Bioethics Society, in 2015, bestowed on him the Distinguished Service Award. Juliet Guichon is an associate professor at the University of Calgary's Cumming School of Medicine in Calgary, Canada. Her work focuses on bioethics issues particularly as they relate to law, journalism and sometimes religion. She has authored academic articles, presented at academic conferences, and was senior editor of the book, The Right to Know One's Origins: The Best Interests of Children of Assisted Human Reproduction (Brussels: ASP). A grant recipient and award-winning lecturer and seminar leader, Dr. Guichon is a frequent contributor to public debate and has founded six child health advocacy groups. Dr. Guichon has been invited by the Canadian House of Commons and Senate to testify in public hearings on health matters and is the recipient of the Canadian Medical Association Medal of Honour, and the Canadian Public Health Association's National Public Health Hero Award. A graduate of Yale University, she earned two law degrees at Oxford University where she was a Commonwealth Scholar, and a doctoral degree in law at the University of Toronto where she was elected Don of Hall of Massey College. She was called to the Bar of Ontario. A native of Calgary, Canada, she has taught at the Universities of Toronto and Brussels.