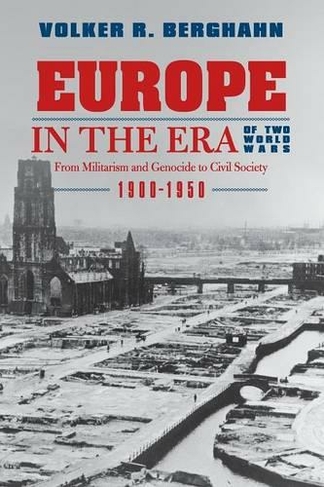 Europe in the Era of Two World Wars From Militarism and Genocide to Civil Society, 1900-1950

How and why did Europe spawn dictatorships and violence in the first half of the twentieth century, and then, after 1945 in the west and after 1989 in the east, create successful civilian societies? In this book, Volker Berghahn explains the rise and fall of the men of violence whose wars and civil wars twice devastated large areas of the European continent and Russia--until, after World War II, Europe adopted a liberal capitalist model of society that had first emerged in the United States, and the beginnings of which the Europeans had experienced in the mid-1920s. Berghahn begins by looking at how the violence perpetrated in Europe's colonial empires boomeranged into Europe, contributing to the millions of casualties on the battlefields of World War I. Next he considers the civil wars of the 1920s and the renewed rise of militarism and violence in the wake of the Great Crash of 1929. The second wave of even more massive violence crested in total war from 1939 to 1945 that killed more civilians than soldiers, and this time included the industrialized murder of millions of innocent men, women, and children in the Holocaust. However, as Berghahn concludes, the alternative vision of organizing a modern industrial society on a civilian basis--in which people peacefully consume mass-produced goods rather than being 'consumed' by mass-produced weapons--had never disappeared. With the United States emerging as the hegemonic power of the West, it was this model that finally prevailed in Western Europe after 1945 and after the end of the Cold War in Eastern Europe as well. 6 halftones.

Volker R. Berghahn is Seth Low Professor of History at Columbia University. He is the author of numerous books on modern German and European history and on European-American relations in the twentieth century including, most recently, "America and the Intellectual Cold Wars in Europe" (Princeton).