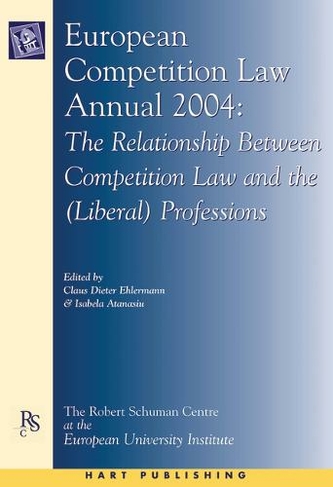 The European Competition Law Annual 2004 is ninth in a series of volumes following the annual workshops on EU Competition Law and Policy held at the Robert Schuman Centre of the European University Institute in Florence. The volume reproduces the materials of the roundtable debate that took place at the ninth edition of the workshop (11-12 June 2004), which examined the relationship between competition law and the regulation of (liberal) professions. The (liberal) professions and the rules governing their functioning have become of interest for EC competition law enforcement since the early nineties, making the object of a series of Commission decisions and judgments of the European courts. The subject has gained in importance in the perspective of the recent decentralisation of EC antitrust enforcement. The regulation of (liberal) professions is also a matter of increasing concern from the perspective of freedom of services in the internal market. The workshop participants - a group of senior representatives of the Commission and the national competition authorities of some Member States, reknown international academics and legal practitioners - discussed the economic, legal and political/institutional issues that arise in the relationship between competition law and the regulation of (liberal) professions. black & white illustrations