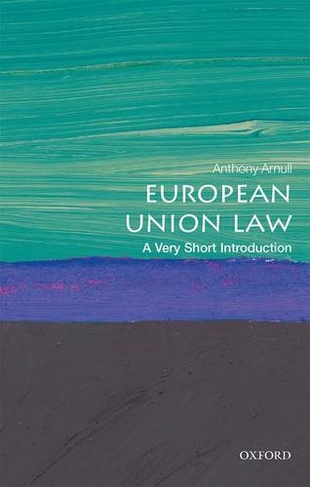 Also available on eBook. Click here to purchase from Kobo.com
The European Union is rarely out of the news and, as it deals with the consequences of the Brexit vote and struggles to emerge from the eurozone crisis, it faces difficult questions about its future. In this debate, the law has a central role to play, whether the issue be the governance of the eurozone, the internal market, 'clawing back powers from Europe' or reducing so-called 'Brussels red tape'. In this Very Short Introduction Anthony Arnull looks at the laws and legal system of the European Union, including EU courts, and discusses the range of issues that the European Union has been given the power to regulate, such as the free movement of goods and people. He considers why an organisation based on international treaties has proved capable of having far-reaching effects on both its Member States and on countries that lie beyond its borders, and discusses how its law and legal system have proved remarkably effective in ensuring that Member States respect the commitments they made when they signed the Treaties. Answering some of the key questions surrounding EU law, such as what exactly it is about, and how it has become part of the legal DNA of its Member States so much more effectively than other treaty-based regimes, Arnull considers the future for the European Union. ABOUT THE SERIES: The Very Short Introductions series from Oxford University Press contains hundreds of titles in almost every subject area. These pocket-sized books are the perfect way to get ahead in a new subject quickly. Our expert authors combine facts, analysis, perspective, new ideas, and enthusiasm to make interesting and challenging topics highly readable. 8 black and white images

Anthony Arnull holds the Barber Chair of Jurisprudence at the University of Birmingham. He has specialised in the law of the European Union for over 30 years and worked at the European Court of Justice in Luxembourg from 1989-92. His publications include The European Union and its Court of Justice (OUP, 2nd ed, 2006), Continuity and Change in EU Law: Essays in Honour of Sir Francis Jacobs (ed, with Piet Eeckhout and Takis Tridimas) (OUP, 2008), andThe Oxford Handbook of European Union Law, (OUP, 2015), with Damian Chalmers. He has given evidence to a number of UK Parliamentary Select Committees and acted as Specialist Adviser to the House of Lords EU Committee. In 2013-14, he served as an output assessor on the Law Sub-Panel for the 2014 Research AssessmentExercise (REF).