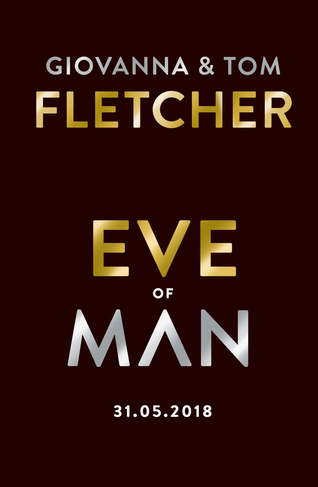 This is the electrifying dystopian love story, the first in the trilogy by bestselling authors Giovanna and Tom Fletcher. '. . . ONE OF THE BIG BOOKS OF THE YEAR. YOU'D BE A FOOL TO MISS IT' HEAT ______________ Eve is like any other teenage girl . . . Except that the fate of the entire world lies on her shoulders. She's the first girl born in fifty years. She's the answer to their prayers. She's the final hope. Which means she has one function alone . . . At sixteen, Eve must face her destiny and make a choice. She will choose a man, one out of three carefully selected suitors. But what about Bram? The future of the planet hangs on Eve making the right choice. Will she? COULD YOU CHOOSE BETWEEN LOVE, AND THE FUTURE OF THE HUMAN RACE?

Rated 4 out of 5 by Aditi from Left Me With A Sense of Potential Unfulfilled EVE OF MAN, in a nutshell, has: 1) An interesting Plot (AND I MEAN VERY INTERESTING) *gestures at you to read synopsis above* 2) Easy to read writing (no superfluous nonsense, YAY) 3) A lot of filler? EVE OF MAN left me with: 1) A sense of something missing, or potential unfulfilled, if you know what I mean Look, I LOVE dystopian novels. I’ve read so many in the last year alone – This Mortal Coil, in particular, to name my favourite one. I love that everything has changed in the not too distant future, that is very real and scary and Eve of Man seemed like it had the PERFECT plot, but somehow, didn’t live up to it’s potential. MY THOUGHTS: 1. Surprisingly, the beginning of this book RAISED my expectations. It was this brilliant start, switching between the highly sheltered, only girl in the world born in fifty years and a boy on the outside, an integral part of the illusion created to keep her safe. 2. I basically loved that this book was told between both Eve and Bram’s viewpoints as the figured out everything happening behind the curtain with the EPO 3. While I loved the plot and the WAY the story was told, I feel like there were some unfinished elements and some elements that felt VERY forced: *SPOILERS* A) After Bram left the tower and went with the Freevers, the way they trusted him and ALSO, how he was suddenly their leader was WAY TOO ABRUPT. Absolutely no rebellion EVER would trust someone who used to be on the enemy side just one day ago and it seemed like a little too much to take in. B) I felt like a lot of the parts with Eve were filler. Maybe I just didn’t like her enough, but I didn’t really enjoy reading through her naïve world view (not her fault) or her tantrums… I just didn’t. I hope she grows in the next two books as a person, and I hope I’ll like her more. C) I feel like the conspiracy with the ‘big bad organisation’ was underplayed. The romance between Eve and Bram took the story over, while the actual consequences to repopulating, the science and the ‘evil’ organisation just went away like POOF *SPOILERS OVER* 4. At the same time, I will definitely be picking up the next book. While there was a lot I thought COULD have been done so much better, considering the stakes, I do HOPE it will all be better in the second book. I fast paced, interesting story with a GREAT PLOT, but with execution that could have been improved. I will definitely be reading more in the series. 3.5 Stars.
Rated 5 out of 5 by Brannie from Couldn’t put the book down I have really enjoyed reading this book and have been unable to put it down, I am really looking forward to the next instalment!

Tom Fletcher (Author) Tom Fletcher is one of the UK's bestselling authors for children. He is the creator of The Christmasaurus, which was the biggest debut middle-grade novel of 2016, as well as being one half of the duo behind the Dinosaur That Pooped picture book series, which has sold over a million copies. Tom is also a musician, Guinness World Record holder and vlogger. His YouTube channel has had almost 100 million video views and 630 thousand subscribers. Tom's books have been translated into thirty-one languages and his most recent is called There's A Dragon in Your Book.Giovanna Fletcher (Author) Essex-born Giovanna is an actress, blogger, vlogger and presenter. She is married to Tom Fletcher from McFly/McBusted and is mum to their two boys Buzz and Buddy. She lives in Middlesex with her family and is a patron of CoppaFeel! as well as a Number One Sunday Times bestselling author. Together with her husband, she wrote the Sunday Times bestselling novel Eve of Man.