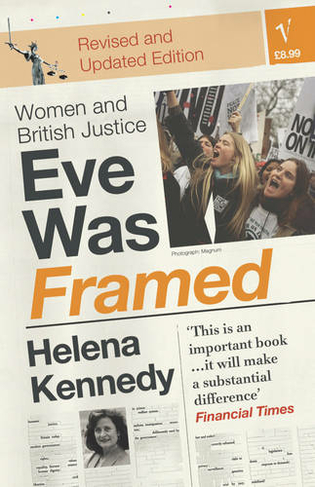 Eve Was Framed offers an impassioned, personal critique of the British legal system. Helena Kennedy focuses on the treatment of women in our courts - at the prejudices of judges, the misconceptions of jurors, the labyrinths of court procedures and the influence of the media. But the inequities she uncovers could apply equally to any disadvantaged group - to those whose cases are subtly affected by race, class poverty or politics, or who are burdened, even before they appear in court, by misleading stereotypes.

Helena Kennedy QC is one of Britain's most distinguished lawyers and public figures. She is a regular broadcaster, journalist and lecturer and throughout her career has focussed on giving voice to those who have least power in the system, championing civil liberties and civil rights. Her 1992 book Eve Was Framed led to a number of key reforms for women and was followed in 2004 by Just Law. She was the Master of Mansfield College, University of Oxford, from 2011 to 2018, and was awarded a life peerage in 1997. Born in Glasgow, she lives in London.