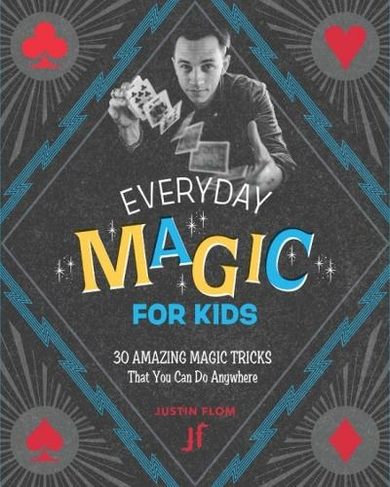 Everyday Magic for Kids: 30 Amazing Magic Tricks That You Can Do Anywhere

By Justin Flom (Author)
Paperback
https://www.whsmith.co.uk/products/everyday-magic-for-kids-30-amazing-magic-tricks-that-you-can-do-anywhere/justin-flom/paperback/9780762492602-12-000.html £8.19 rrp £9.99 Save £1.80 (18%)
GBP
Availability
In Stock
Free Delivery Available When You Spend £25 Or More
Details
Spend £25 on eligible products to receive free standard delivery to home or free next working day click and collect to store
Share

Using every day objects, daring magician Justin Flom (434K Facebook followers and 153K subscribers on YouTube) will teach kids all they need to know to perform 30 amazing and how-did-you-do-that magic tricks at the turn of a hat. Featuring step-by-step instructions and illustrations, Everyday Magic for Kids will give budding magicians all the tips they need in order to wow their friends and family, whether at home, at school, or on the go. Tricks will vary from card tricks to tricks with coins and other small objects to tricks that can be done with friends/family members. The book also includes introductory material about how to act like a magician and the basics of performing magic in front of an audience (be it a friend or a room of people). 150 Halftones, duotone

Justin Flom is best known for his YouTube series and television show Wizard Wars in which he performs magic with ordinary objects. Along with his video and television work, he performs live with either his own touring show or opening for music acts in large venues. He has appeared on Ellen, The Today Show, Rachael Ray, and others, and has worked with brands such as Coke, American Airlines, and Kellogg's. He lives with his family in Henderson, Nevada.