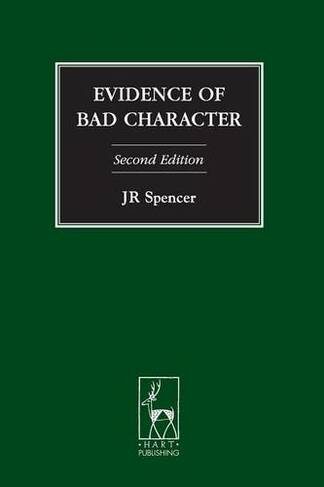 This is the second edition of John Spencer's now well established book which seeks to explain this complex area of law for the benefit of members of judges, criminal practitioners and academics teaching the law of evidence. In the past, the rule excluding evidence of the defendant's general bad character and disposition to commit the offence was sometimes described as one of the most hallowed rules of evidence; Lord Sankey, in Maxwell v DPP, referred to it as '...one of the most deeply rooted and jealously guarded principles of our criminal law.' In reality it was not particularly ancient, and in recent years was increasingly attacked. On technical grounds the body of law surrounding it was criticised as over-complicated and inconsistent, and more radical critics condemned it as unduly favourable to the guilty. In response to this, the law was completely recast in Part II of the Criminal Justice Act 2003. This book, now updated to take into account a raft of new cases, offers a thorough analysis of the bad character provisions of the Criminal Justice Act 2003 in the light of the way in which they have been interpreted by the courts From the reviews of the first edition: 'It is difficult to see how this complex legislation could be presented or explained more clearly...essential for all criminal practitioners.' Nigel Pascoe QC, Counsel '...a concise, highly portable and valuable little book.' Benedict Mills, New Law Journal '...a thorough and remarkably clear analysis of the bad character provisions...You can expect to see this book produced widely in court.' Andrew Keogh, Crimeline Updater '...the commentary is of a high and scholarly standard...It is small and light enough to be slipped into the case of travelling counsel, and is likely to be considered authoritative enough to be cited in court...should be required reading for counsel and the judiciary.' Jon Mack, Internet Law Book Reviews 'An outstanding account of a difficult topic in the law of evidence' Professor Andrew Choo, University of Warwick.

JR Spencer QC is Professor of Law in the University of Cambridge and a Fellow of Selwyn College.