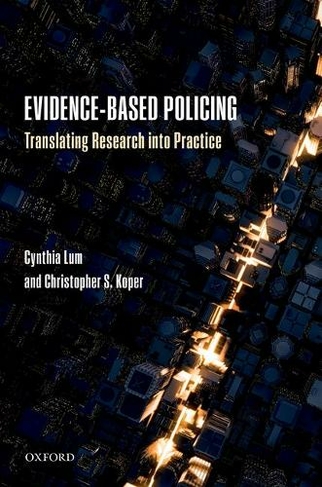 Also available on eBook for £38.27. Click here to purchase from Rakuten Kobo

Today's police agencies are in a period of both crisis and reform as they try to improve their ability to deliver public safety to citizens in ways that are effective, legitimate, and sustainable. Evidence-based policing offers one such solution - an approach which emphasises the value that research can bring to police officers and, by extension, the public they serve. However, evidence-based policing is not just about the process of understanding and evaluating police practices. It is also about translating and using that knowledge in daily police activities. This unique book examines the scientific evidence for the effectiveness of various police practices and provides tools to help turn research into practice. Part I gives a practitioner's definition of evidence-based policing, a primer on how to judge and interpret research findings, and a review of the Evidence-Based Policing Matrix, a tool for translating research on police crime control interventions. In Part II the authors review the breadth of knowledge about policing interventions for people, places, communities, and technology, focusing on how to optimize operations based on this information. Tools and ideas that can assist in implementing evidence-based practices into patrol, investigations, supervision, management, crime analysis, and leadership are provided in Part III. Finally, in Part IV the authors speak to researchers about how they might continue to work with police agencies to advance evidence-based policing.