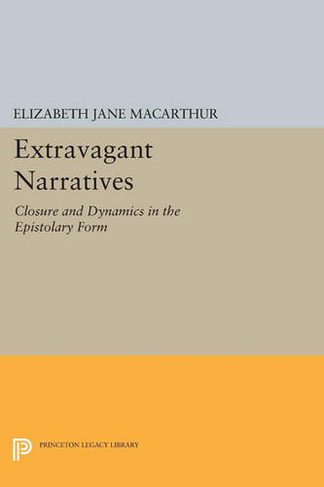 Extravagant Narratives Closure and Dynamics in the Epistolary Form

Challenging the view of epistolary narrative as a faulty precursor to the nineteenth-century realist novel, Elizabeth MacArthur argues that the openness and flexibility that characterize correspondences, both real and fictional, reflect the preoccupations of the late seventeenth and eighteenth centuries. Her readings of the Lettres portugaises, Mme du Deffand's correspondence with Horace Walpole, and Rousseau's La Nouvelle Hlose propose an alternative to closure-oriented theories of narrative as they uncover an interplay between two forces: a tendency towards closure and meaning (metaphor) and a tendency towards openness and desire (metonymy). While such an interplay structures all narrative, the epistolary form differs from the third or first person in the extent to which metonymy predominates. The author shows how critics and editors of correspondences have attempted to control their metonymy, channeling epistolary energy into univocal meaning. By juxtaposing real and fictional epistolary works, MacArthur reveals the similarities between the two, particularly their "extravagance": ambiguity, openness, and forward-moving energy. Originally published in 1990. The Princeton Legacy Library uses the latest print-on-demand technology to again make available previously out-of-print books from the distinguished backlist of Princeton University Press. These editions preserve the original texts of these important books while presenting them in durable paperback and hardcover editions. The goal of the Princeton Legacy Library is to vastly increase access to the rich scholarly heritage found in the thousands of books published by Princeton University Press since its founding in 1905.