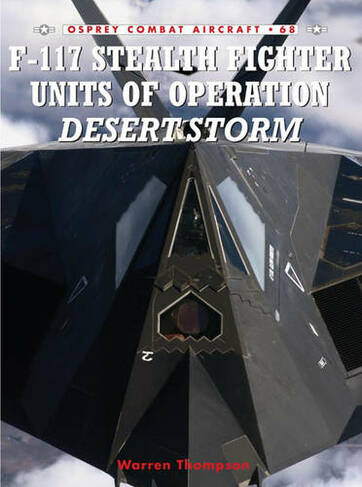 By Warren Thompson (Author), Mark Styling (Illustrator)
Paperback
https://www.whsmith.co.uk/products/f117-stealth-fighter-units-of-operation-desert-storm-combat-aircraft-no-68/warren-thompson/mark-styling/paperback/9781846031823-01-000.html £13.79 rrp £14.99 Save £1.20 (8%)
GBP
Availability
Currently unavailable. We don't know when or if this item will be back in stock
Free Saver Delivery on orders over £20
Details
FREE SHIPPING over £20 for Saver Delivery
Share

During the final years of the 20th century, the most significant break-through in military weaponry was the concept of Stealth technology, and the first mass-produced weapon to utilize this to perfection was the F-117 Nighthawk. Originally delivered in 1982, its existence was officially denied until the Iraqi invasion of Kuwait, when it entered the public spotlight over the skies of Baghdad. Illustrated with stunning color photographs of the F-117 above Iraq, and complemented by numerous personal accounts from the pilots themselves, this book explores the history and combat experience of one of the most secretive planes ever built. Illustrations (some col.)

Warren Thompson has been an avid military aviation historian / writer / contributing editor for over 40 years. He has had 25 books published with a further two to be published by Osprey in early 2006 (Aces Series). He has had numerous magazine articles published on subjects covering World War II, the Korean War, Vietnam, and the Cold War. His personal reference collection includes thousands of photos and detailed interviews, with over 2000 pilots and aircrew members. The focus on any project he has worked on, in addition to securing personal input and pictures, has been to get an original squadron, group or wing patch, for each of the units involved.During the past 25 years, he has had 27 tanker rides as a photographer, and spent 14 days in total on two U.S. Navy aircraft carriers, also gathering interviews and pictures on both. The author lives in Tennessee, USA.