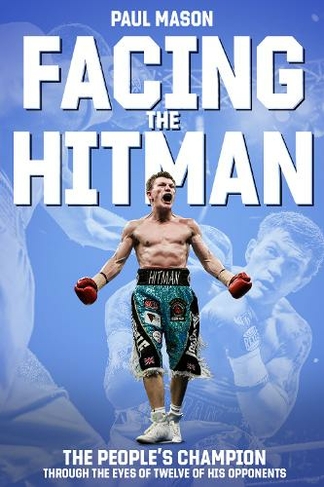 Facing the Hitman: The People's Champion Through the Eyes of His Opponents

By Paul Mason (Author)
Hardback
https://www.whsmith.co.uk/products/facing-the-hitman-the-peoples-champion-through-the-eyes-of-his-opponents/paul-mason/hardback/9781785316401-12-000.html £15.99 rrp £19.99 Save £4.00 (20%)
GBP
Availability
PRE-ORDER released 30 August 2021
With Free Standard Delivery To Your Home Or Store
Details
Spend £15 On Eligible Products To Recieve Free Standard Delivery To You Home Or Free Next Working Day Click And Collect To Store
Share

What's it like to share the ring with a British boxing legend? Facing the Hitman charts the career of one of Britain's best-loved boxers, as seen through the eyes of 12 key opponents who helped shape the legend of Ricky 'the Hitman' Hatton. From his professional debut at a Widnes leisure centre in 1997, to the Manchester star's final fight in an emotional comeback in his Manchester Arena fortress, you'll get the inside story from a dozen men who dared to test their mettle against Hatton. The book delves into the pre-fight build-up and psychological preparation of his opponents, before examining fight night itself, what it was like to go toe to toe with the Hitman and what happened afterwards. Follow Ricky's rise from humble beginnings on a Manchester council estate through to becoming a two-weight world champion - from his pro debut against journeyman Colin McAuley, to his British title clash with the formidable Jon Thaxton and his fights at elite level against the likes of Kostya Tszyu, Paulie Malignaggi and Floyd Mayweather Jr. Includes colour picture section

Paul Mason is an avid boxing fan and freelance journalist. He has been a contributor to various boxing websites and social media platforms for several years, and is a boxing correspondent for the Leicester Mercury. He regularly attends fights, covering the action from ringside.