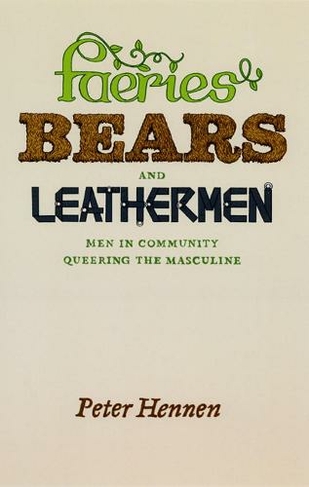 Faeries, Bears, and Leathermen: Men in Community Queering the Masculine

Over time, male homosexuality and effeminacy have become indelibly associated, sometimes even synonymous. In "Faeries, Bears, and Leathermen", Peter Hennen contends that this stigma of effeminacy exerts a powerful influence on gay subcultures. Through a comparative ethnographic analysis of three communities, Hennen explores the surprising ways that conventional masculinity is being collectively challenged, subverted, or perpetuated in contemporary gay male culture.Hennen's colorful study focuses on a trio of groups: the Radical Faeries, who parody effeminacy by playfully embracing it, donning prom dresses and glitter; the Bears, who strive to appear like "regular guys" and celebrate their larger, hairier bodies; and the Leathermen, who emulate hypermasculine biker culture, simultaneously paying homage to and undermining notions of manliness. Along with a historical analysis of the association between effeminacy and homosexuality, Hennen examines how this connection affects the groups' sexual practices. Ultimately, he argues, while all three groups adopt innovative approaches to gender issues and sexual pleasure, masculine norms continue to constrain members of each community.

Peter Hennen is assistant professor of sociology at the Ohio State University at Newark.