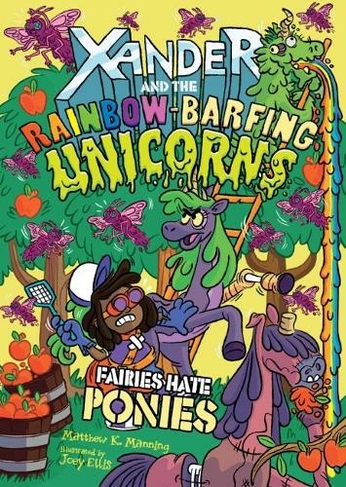 Xander discovers a new magical creature millions of them, actually! In this adventure, a swarm of insects threatens the Montgomery Orchard and twelve-year-old Xander's fruitful summer job. Luckily, the so-called bugs aren't actually bugs. Unluckily, they're miniature, unicorn-hating, insect fairies from the magical world of Pegasia! If Xander and his team of Rainbow-Barfing Unicorns can't rid the orchard of these no-good fairies, their secret will be blown quicker than a stomach-load of full-spectrum chunks. Plump-full of grotesquely delightful characters and fantastical realms, Xander and the Rainbow-Barfing Unicorns from writer Matthew K. Manning (Batman/Teenage Mutant Ninja Turtles Adventures) is so epic it'll make you wanna puke.

The author of the Amazon best-selling hardcover Batman: A Visual History, Matthew K. Manning has contributed to many comic books, including Beware the Batman, Spider-Man Unlimited, Pirates of the Caribbean: Six Sea Shanties, Justice League Adventures, Looney Tunes, and Scooby-Doo, Where Are You? When not writing comics themselves, Manning often authors books about comics, as well as a series of young reader books starring Superman, Batman, and the Flash for Capstone. He currently resides in Asheville, North Carolina with his wife Dorothy and their two daughters, Lillian and Gwendolyn. Visit him online at www.matthewkmanning.com. Joey Ellis lives and works in Charlotte, NC with his wife Erin and two sons. Joey writes and draws for books, magazines, comics, games, big companies, small companies, and everything else in between.