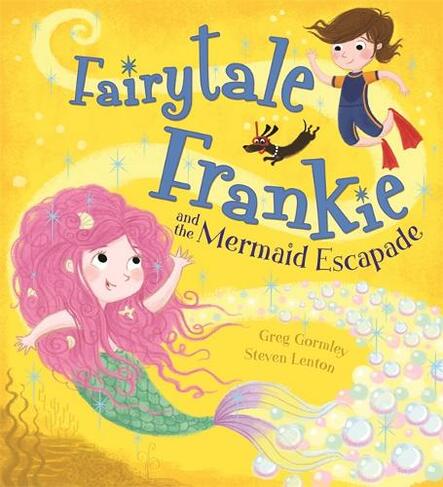 Fairytale Frankie and the Mermaid Escapade

A fun-filled seaside caper full of favourite fairytale characters, with a positive message about overcoming worries and anxiety. When Fairytale Frankie meets a worried mermaid, a wizard lifeguard, a surfing prince and a talking parrot, she knows it's going to be an unusual day at the beach. Everyone needs Frankie's help - the scary sea monster is coming, and no one knows what to do! Can the fairytale friends learn to be big and brave together? This funny, fast-paced story is a visual feast - a real treat from one of the most exciting contemporary artists working today, illustrator of the much-loved top seller Shifty McGifty and Slippery Sam.

Greg Gormley (Author) Greg Gormley is the author of several internationally successful picture books. His title Dog in Boots earned superb reviews and was selected for the USBBY outstanding international books list and the Oprah Winfrey Best Picture Books of 2012 list. His first book with Orchard Fairytale Frankie and the Tricky Witch is illustrated by Steven Lenton. He lives in Cambridge with his family and a giant dog called Sid.Steven Lenton (Illustrator) Steven Lenton loves to illustrate books, filling them with charming, fun characters that really capture children's imaginations. He is the illustrator of Shifty McGifty and Slippery Sam, which was both Waterstones picture book of the month and The Times children's book of the week, and the Radley Twelve Days of Christmas. Steven is originally from Congleton in Cheshire and now splits his time between Bath and London where he works from his studios with his little dog, Holly.Visit http://www.2dscrumptious.com