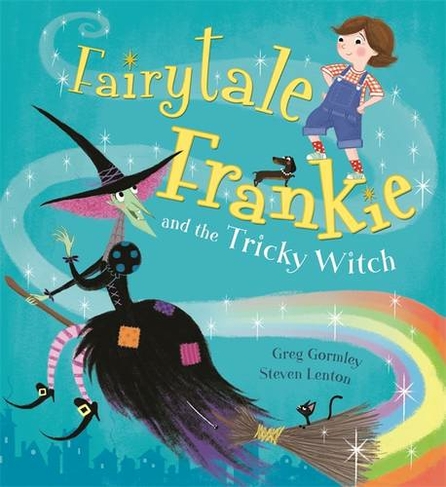 Fairytale Frankie and the Tricky Witch

Beneath this glitter-tastic cover is a page-turning hide-and-seek adventure full of favourite fairytale characters from princesses to unicorns to knights, with a magically funny and reassuring twist at the end. Fairytale Frankie is a fearless tomboy who wakes up one morning to find a princess hiding under her bed and a frog in the cornflakes . . . all the characters appear to be hiding from a baddie and Frankie is determined to keep them safe. This funny, fast-paced story is a visual feast - a real treat from one of the most exciting contemporary artists working today, illustrator of the much-loved top seller Shifty McGifty and Slippery Sam. Superbly imaginative and wonderfully illustrated with joy and verve - Parents in Touch

Greg Gormley is the author of several internationally successful picture books. His title Dog in Boots earned superb reviews and was selected for the USBBY outstanding international books list and the Oprah Winfrey Best Picture Books of 2012 list. His first book with Orchard Fairytale Frankie and the Tricky Witch is illustrated by Steven Lenton. He lives in Cambridge with his family and a giant dog called Sid. Steven Lenton loves to illustrate books, filling them with charming, fun characters that really capture children's imaginations. He is the illustrator of Shifty McGifty and Slippery Sam, which was both Waterstones picture book of the month and The Times children's book of the week, and the Radley Twelve Days of Christmas. Steven is originally from Congleton in Cheshire and now splits his time between Bath and London where he works from his studios with his little dog, Holly.Visit http://www.2dscrumptious.com