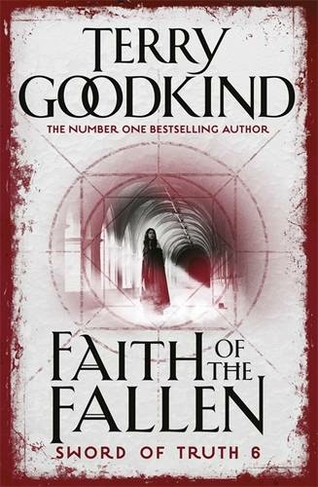 Faith of the Fallen: (Gollancz S.F.)

By Terry Goodkind (Author)
Paperback
https://www.whsmith.co.uk/products/faith-of-the-fallen-gollancz-sf/terry-goodkind/paperback/9780752889757-12-000.html £11.99 rrp £14.99 Save £3.00 (20%)
GBP
Availability
In Stock
Free Delivery Available When You Spend £25 Or More
Details
Spend £25 On Eligible Products To Recieve Free Standard Delivery To You Home Or Free Next Working Day Click And Collect To Store
Share

SOUL OF THE FIRE saw the political machinations that have dogged the midlands reach new heights, as the Chimes ran free and threatened magic everywhere. As the novel ended, Kahlan has narrowly avoided death and now she and Richard Rahl, the Seeker, must strive again to save the world from the resurgent armies of the Emperor Jagang. From the very first page, FAITH OF THE FALLEN pitches Richard and Kahlan into their most desperate fight yet - a fight where worlds once again hang in the balance. Richard must embark on a course of action that will leave his people feeling betrayed and vulnerable, and which will take both he and Kahlan away from the protection of the D'Haran armies. But he has no choice. Richard, who distrusts prophecy more than anyone, has had a vision. It is a vision he is compelled to follow.

Terry Goodkind's first novel, Wizard's First Rule, immediately established him as one of the world's bestselling authors. Each subsequent book in the Sword of Truth series sold better than the one before and some twenty million copies of books in the series have now been sold. He lives in the USA.