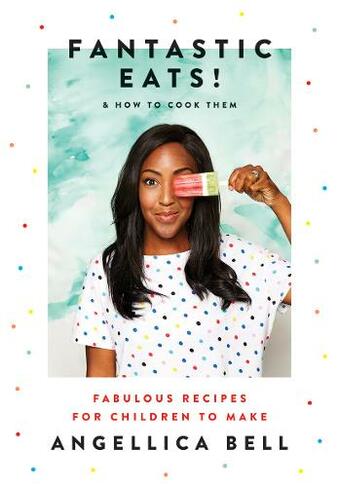 Fantastic Eats! & how to cook them - fabulous recipes for children to make

This is the book for children aged 5 and upwards who are keen to get into the kitchen and start cooking but don't want boring grown-up cookbooks. Angellica Bell has not only spent years as a presenter on CBBC and BBC, she's a fantastic cook who won BBC TV's Celebrity Masterchef. Through 30 fun, step-by-step recipes that she makes with her own children, in Fantastic Eats! Angellica gets youngsters excited about creating tasty sweet and savoury dishes for everyone to share. Her recipes will bring the whole family together as you try your own home-made hamburgers, butternut squash and sweet potato fritters, Jamaican rock buns and icy watermelon lollies. Every recipe has photos and instructions to show you exactly what to do, so parents can put their feet up while the children cook! (Make sure you do the washing-up afterwards, guys!) An essential book for every household with young children, Angellica's recipe ideas, fun tips and inspiration will make a masterchef of even the youngest member of the household. Full colour photography throughout

Angellica Bell is a presenter who worked as the face of Children's BBC for 7 years before moving to regular presenting roles on BBC's The One Show and The Big Family Cooking Showdown. She also presents The Martin Lewis Money Show on ITV and Dog Rescuers on Channel 5. In 2017 she won the BBC's Celebrity MasterChef competition in a final watched by over 5 million viewers. She lives in London with her husband Michael Underwood (a fellow TV presenter and Celebrity MasterChef finalist) and their two children.