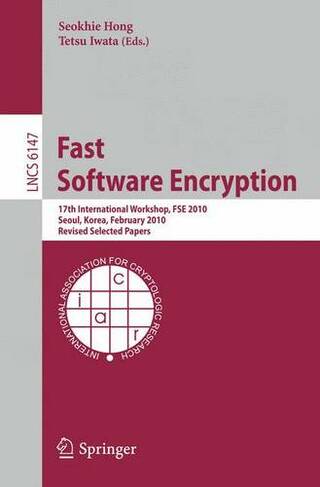 Fast Software Encryption (FSE) 2010,the 17th in a series of workshopson s- metriccryptography,washeldinSeoul,Korea,duringFebruary7-10,2010.Since 2002,theFSE workshophasbeensponsoredbythe InternationalAssociationfor Cryptologic Research (IACR). The ?rst FSE workshop was held in Cambridge, UK (1993), followed by workshops in Leuven, Belgium (1994), Cambridge, UK (1996),Haifa,Israel(1997),Paris,France(1998),Rome, Italy(1999),NewYork, USA (2000), Yokohama, Japan (2001), Leuven, Belgium (2002), Lund, Sweden (2003), New Delhi, India (2004), Paris, France (2005), Graz, Austria (2006), Luxembourg, Luxembourg (2007), Lausanne, Switzerland (2008), and Leuven, Belgium (2009). The FSE workshop concentrates on fast and secure primitives for symmetric cryptography, including the design and analysis of block ciphers, stream ciphers, encryption schemes, analysis and evaluation tools, hash fu- tions, and message authentication codes. This year 67 papers were submitted. Each paper was reviewed by at least threereviewers,andpapers(co-)authoredbyProgramCommitteememberswere reviewed by at least ?ve reviewers. From the 67 papers, 21 were accepted for presentationattheworkshop,andtheseproceedingscontaintherevisedversions of the papers. At the end of the review phase, the Program Committee selected the paper "Attacking the Knudsen-Preneel Compression Functions" by Onur .. Ozen, Thomas Shrimpton, and Martijn Stam to receive the best paper award. The workshop also featured two invited talks, "The Survey of Cryptanalysis on Hash Functions" by Xiaoyun Wang and "A Provable-Security Perspective on Hash Function Design" by Thomas Shrimpton. Along with the presentation of the papers and the invited talks, the rump session was organized and chaired by Orr Dunkelman. 71 Illustrations, black and white; XI, 385 p. 71 illus.