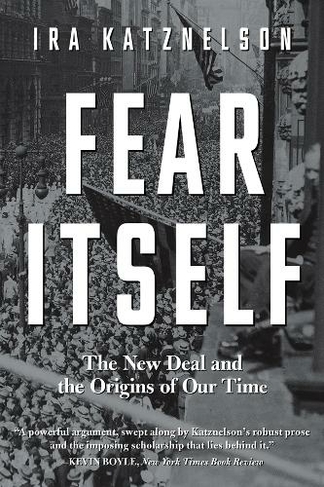 Fear Itself: The New Deal and the Origins of Our Time

A work that "deeply reconceptualizes the New Deal and raises countless provocative questions" (David Kennedy), Fear Itself changes the ground rules for our understanding of this pivotal era in American history. Ira Katznelson examines the New Deal through the lens of a pervasive, almost existential fear that gripped a world defined by the collapse of capitalism and the rise of competing dictatorships, as well as a fear created by the ruinous racial divisions in American society. Katznelson argues that American democracy was both saved and distorted by a Faustian collaboration that guarded racial segregation as it built a new national state to manage capitalism and assert global power. Fear Itself charts the creation of the modern American state and "how a belief in the common good gave way to a central government dominated by interest-group politics and obsessed with national security" (Louis Menand, The New Yorker). 24 illustrations

Ira Katznelson is Columbia University's Ruggles Professor of Political Science and History. Having served as president of the American Political Science Association, he is a member of the Academy of Arts and Sciences and the American Philosophical Society. He is also the author of Fear Itself and When Affirmative Action Was White.