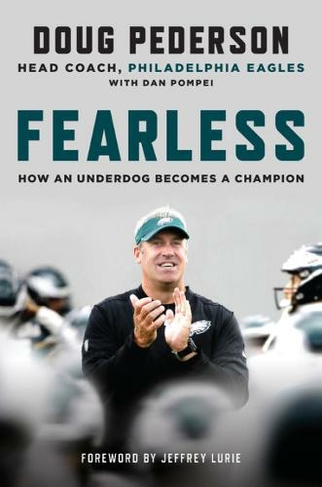 Fearless How an Underdog Becomes a Champion

Coming off a 2016-2017 season in which they lost more games than they won, few believed this Eagles team could even make the playoffs, much less advance to the Super Bowl in 2018. Then when the Eagles knocked out formidable teams in the Atlanta Falcons and the Minnesota Vikings-both of which had been favorites-even fewer thought they could go up against the dynastic Patriots and emerge victorious. But Doug Pederson, who had bonded with the motley crew of players over the course of the season and taught them how they could work together to flummox any offense and any defense, no matter how formidable, never doubted that his team was up to the task. Taking readers behind the scenes-onto the field where the Eagles practiced religiously and scrutinized weeks worth of tape to identify their opponents' weaknesses and into the locker room where Pederson rallied his players' hopes when they began to question themselves-FEARLESS tells the inspiring story of how one underdog team worked to do the unimaginable: taking down the New England Patriots, who had won more Super Bowls over the past decade and a half than any other team. Distilling Pederson's insights into identifying talent and building a selfless team that puts success first, FEARLESS is the inspiring story of a beloved, audacious group and the making of one of the most memorable seasons in NFL history. 16-page color insert

Doug Pederson is the coach of the Super Bowl LII champion Philadelphia Eagles. In his second season as an NFL head coach, Pederson led the Eagles to an NFC East title, the No. 1 seed in the NFC playoffs, and the first Super Bowl title in franchise history with a 41-33 victory over the New England Patriots. He spent fourteen years as a quarterback in the NFL, serving as the backup for Brett Favre for many years on the Green Bay Packers. Pederson lives with his wife, Jeannie, and their children in Moorestown, New Jersey. Dan Pompei has written about the NFL for more than three decades and received the 2013 Dick McCann Award for long and distinguished reporting on professional football. He currently writes for Bleacher Report and The Athletic.