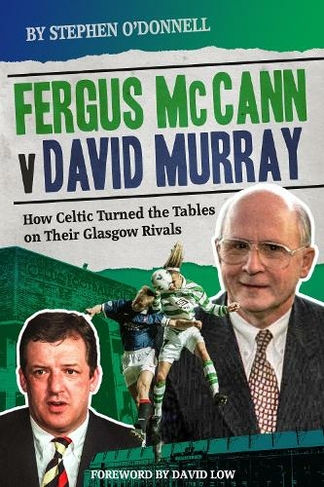 Fergus McCann Versus David Murray: How Celtic Turned the Tables on Their Glasgow Rivals

By Stephen O'Donnell (Author)
Hardback
https://www.whsmith.co.uk/products/fergus-mccann-versus-david-murray-how-celtic-turned-the-tables-on-their-glasgow-rivals/stephen-odonnell/hardback/9781785316432-12-000.html £15.99 rrp £19.99 Save £4.00 (20%)
GBP
Availability
In Stock
With Free Standard Delivery To Your Home Or Store
Details
Spend £15 On Eligible Products To Recieve Free Standard Delivery To You Home Or Free Next Working Day Click And Collect To Store
Share

Fergus McCann Versus David Murray charts the changing fortunes of Glasgow's two great footballing rivals as shaped by two business moguls. Both men came to prominence in the 1990s when new methods of governance and finance were taking hold of football. At the start of the decade, under Murray's chairmanship, Rangers were the dominant force and the club went on to win a record-equalling nine consecutive league titles. Their success, however, was built on an extravagant spending strategy, which caused a financial catastrophe. Celtic, by contrast, were struggling in the early 1990s, thanks to a complacent and nepotistic board of directors. But McCann took charge of the club in 1994 and turned things around. The new owner left Parkhead having won the league, rebuilt the stadium and left his shares in the hands of supporters. It was Murray, however, who was lauded in the media throughout his tenure at Ibrox, while McCann was chastised. Ultimately, though, their legacies would be utterly different from those misleading media portrayals. Includes colour photo section

Stephen O'Donnell is a freelance writer of football-themed fiction and non-fiction. His work includes the novels Paradise Road (2012) and Scotball (2014), as well as Tangled Up in Blue: The Rise and Fall of Rangers FC, which was published by Pitch in August 2019. He is also a contributor to The Blizzard, Nutmeg and Bella Caledonia.