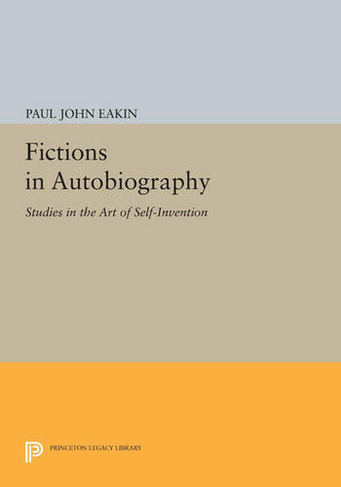 Fictions in Autobiography: Studies in the Art of Self-Invention (Princeton Legacy Library)

Investigating autobiographical writing of Mary McCarthy, Henry James, Jean-Paul Sartre, Saul Friedlander, and Maxine Hong Kingston, this book argues that autobiographical truth is not a fixed but an evolving content in a process of self-creation. Further, Paul John Eakin contends, the self at the center of all autobiography is necessarily fictive. Professor Eakin shows that the autobiographical impulse is simply a special form of reflexive consciousness: from a developmental viewpoint, the autobiographical act is a mode of self-invention always practiced first in living and only eventually, and occasionally, in writing. Originally published in 1985. The Princeton Legacy Library uses the latest print-on-demand technology to again make available previously out-of-print books from the distinguished backlist of Princeton University Press. These editions preserve the original texts of these important books while presenting them in durable paperback and hardcover editions. The goal of the Princeton Legacy Library is to vastly increase access to the rich scholarly heritage found in the thousands of books published by Princeton University Press since its founding in 1905.