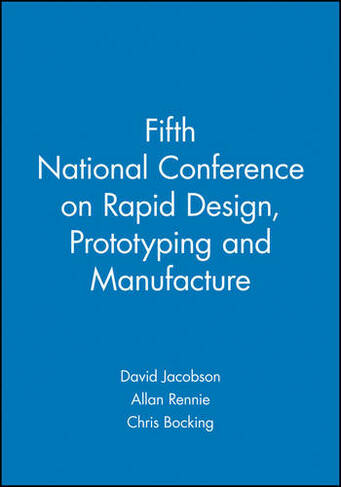 David Jacobson obtained a doctorate in Materials Science from the University of Sussex. He has established a career in industrial research, with specialist expertise in metal joining and electronics packaging. After managing the Materials Fabrication Division of GEC-Marconi in north London from 1985 to 1997, he now works as a freelance consultant. Since January 2000, he has had a part-time appointment as a Research Fellow at the Centre for Rapid Design and Manufacture, helping to set up collaborative research projects on rapid manufacturing. From January 2003, he has coordinated the Fastool Project, a major European collaborative R&D programme on machine tool automation, on behalf of the Gauge and Toolmakers Association (GTMA). While at GEC-Marconi, he co-authored a textbook on The Principles of Soldering and Brazing, published by the American Society of Materials, which is now entering its second edition. David is the author of over 75 publications in scientific and technical literature, and was a recipient of the Robert R Peaslee Award of the American Welding Society in 1997 and again in 2003, the Cook Prize of the Institute of Materials for 1996/1997, and the Westinghouse Prize of the Institute of Metal Finishing in 2003. Allan Rennie obtained a Bachelors in Computer Aided Engineering from Glasgow Caledonian University in 1995, which spurred his interest in rapid prototyping. This led to a move to the Centre for Rapid Design and Manufacture where he conducted research in various areas of rapid prototyping technologies, finally leading to the award of a PhD from Brunel University. After a spell as an R&D Engineer with CRDM, a move back northwards saw Allan settle at Lancaster University to manage the Lancaster Product Development Unit, set up using ERDF grants to provide support to the SME community of the North West Region. Allan is co-recipient of the Westinghouse Prize of the Institute of Metal Finishing in 2003. Chris Bocking obtained a Graduateship of the Institute of Metal Finishing from the South Bank Polytechnic in 1981 and a PhD on applied electrochemistry from Loughborough University in 1994. He has worked in surface engineering for 30 years, of which 19 were spent at the GEC Hirst Research Centre in the Electrochemistry Group, as both Project Leader and Group Manger on both the development of new electroplating processes and their applications for the electronics industry. He is currently employed on a part-time basis as Research Co-ordinator at the Centre for Rapid Design and Manufacture, working on the development and use of new materials for rapid tooling and the application of electroforming to toolmaking and advanced manufacturing processes. He is also a Vice President of the Institute of Metal Finishing, and runs a surface engineering consultancy business - Surface Technology Support. Chris is co-recipient of the Westinghouse Prize of the Institute of Metal Finishing in 2003.