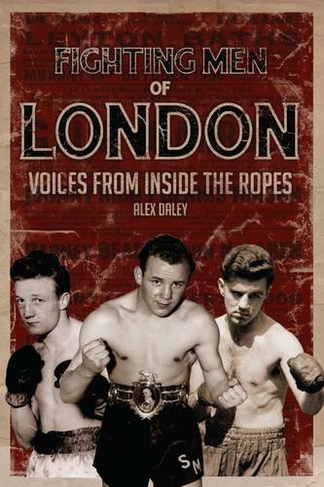 Fighting Men of London Voices from Inside the Ropes

Fighting Men of London explores the lives of seven former professional boxers who fought in the capital between the 1930s and 1960s. Set around a series of interviews, it resurrects a golden age of the sport when boxing was as popular as football and Britain's leading fighters were working-class heroes. Dramatic, poignant, inspiring and at times funny, the book covers such subjects as booth fighting, exploitation in boxing, East End poverty, World War Two London, Jewish culture, fame and success, crime, prison life and encounters with such figures as the Kray twins, the Great Train Robbers and Britain's most infamous inmate, Charles Bronson. Fighting Men of London takes us on a journey through a lost era of smoky fight halls, ramshackle boxing arenas and courageous fighting men. It features the previously untold stories of 1950s boxing star Sammy McCarthy, Bethnal Green knockout specialist Ted Berry (an associate of the Kray twins) and Sid Nathan, who as one of Britain's last surviving 1930s boxers once shared a fight bill with the great Jack Kid Berg. This isn't a single story, but seven stories of seven very different men. The common bond they shared was boxing. Assorted mono and colour pictures

Alex Daley is a grandson of 1920s boxing legend Nipper Pat Daly, and author of the critically acclaimed biography Nipper: The Amazing Story of Boxing's Wonderboy. A copywriter by profession, Alex caught the boxing bug after researching his grandfather's remarkable ring career and has a keen interest in British boxing history.