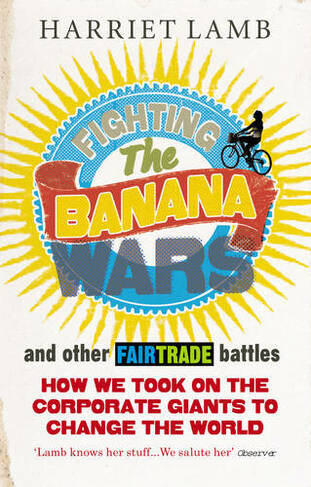 Fighting the Banana Wars and Other Fairtrade Battles

By Harriet Lamb (Author)
Paperback
https://www.whsmith.co.uk/products/fighting-the-banana-wars-and-other-fairtrade-battles/harriet-lamb/paperback/9781846040849-01-000.html £11.95 rrp £12.99 Save £1.04 (8%)
GBP
Availability
Currently unavailable. We don't know when or if this item will be back in stock
Free Saver Delivery on orders over £20
Details
FREE SHIPPING over £20 for Saver Delivery
Share

It started very small and full of hope. But its daring campaigns have placed Fairtrade goods at the heart of the supermarket shelves. From bananas and coffee beans to cotton and chocolate, Fairtrade has grown to become an important global movement that has revolutionised the way we shop. As Harriet Lamb, Chief Executive of Fairtrade International, explains in this extensively revised and updated edition of her inspirational book, Fairtrade is about a better deal for workers and famers in the developing world. It's about making sure the food on our plates, and shirts on our backs, don't rob people in other countries of the means to feed or clothe themselves. She explores the journey, through an often unjust system, that Fairtrade items make from farm to consumer. And she uncovers the shocking cost of our demand for cheaper food. There is much still to be done. But by hard work and high ideals, Fairtrade is starting to transform the lives of over 7 million farmers, workers and their families, and is a powerful symbol of how extraordinary change can be achieved against all the odds - by us all.

Harriet Lamb is Chief Executive of Fairtrade International, the umbrella body for Fairtrade across the world. From 2001-12 she was Chief Executive Officer of the Fairtrade Foundation in the UK and before this was Banana Co-ordinator for Fairtrade globally. Harriet has lived and travelled widely in the developing world, including working with farmers and landless labour co-operatives in India. Her awards include a CBE for her contribution to Fairtrade and in 2013 she became the first female Honorary Fellow of Trinity Hall, Cambridge University.