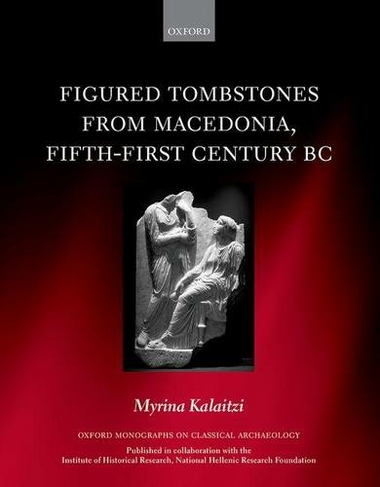 By Myrina Kalaitzi (Author)
Hardback
https://www.whsmith.co.uk/products/figured-tombstones-from-macedonia-fifthfirst-century-bc-oxford-monographs-on-classical-archaeology/myrina-kalaitzi/hardback/9780198746454-01-000.html £130.50 rrp £145.00 Save £14.50 (10%)
GBP
Availability
Currently unavailable. We don't know when or if this item will be back in stock
Share

Figured Tombstones from Macedonia, Fifth-First Century BC brings together for the first time a substantial body of material from ancient Macedonia, comprising stone funerary monuments, be they statues, stelai, or reliefs, which feature figured representations. The volume's geographical focus encompasses what can be referred to as the national territory of the ancient Macedonians, as established largely from the reign of Philip II until the last Antigonids, and extending from the range of Mount Pindos and Lake Lychnitis in the west as far as the Strymon valley and Mount Pangaion in the east. Its broad chronological scope stretches back to prehistoric times, when stone funerary monuments seem to have first appeared in the area, and into the first century AD, when significant changes in the modes which shaped (self-) representation in a funerary context can be traced. However, the volume takes as its main focus the Classical and Hellenistic periods, describing and unravelling the codes which moulded the representation of the dead on tombstones dating from the fifth to the first century BC. Paying close attention to the wealth of information that can be gained through morphological, typological, iconographical, and epigraphic analysis, the volume goes beyond artistic evaluation to consider social history: social and gender roles, social status, cultural identity, regionalism or consciously constructed cosmopolitanism, shifts in religious behaviour, and attitudes towards death and a possible afterlife are all addressed, revealing the ideas that shaped aesthetic predilections and the choice of (self-)representation. 238 black and white illustrations, 8-page colour plates section, and 8 maps

Myrina Kalaitzi is an Assistant Researcher at the National Hellenic Research Foundation.