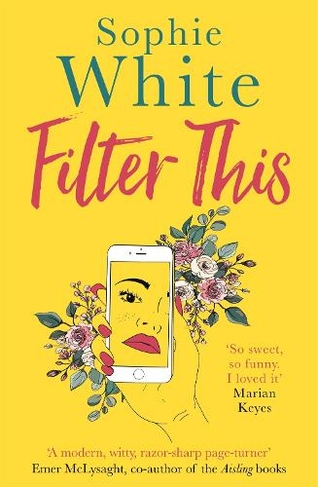 Filter This: The modern, witty debut everyone is talking about

By Sophie White (Author)
Paperback
https://www.whsmith.co.uk/products/filter-this-the-modern-witty-debut-everyone-is-talking-about/sophie-white/paperback/9781529343311-12-000.html £10.65 rrp £12.99 Save £2.34 (18%)
GBP
Availability
In Stock
Free Delivery Available When You Spend £25 Or More
Details
Spend £25 On Products To Receive Free Standard Delivery To Your Home Or Free Next Working Day Click And Collect To Store

'I loved this so much ... a modern, witty, razor-sharp page-turner' Emer McLysaght, co-author Once, Twice, Three Times an Aisling 'So sweet, so funny -- I loved it' Marian Keyes 'Ali is one of the best flawed heroines in Irish commercial fiction since Rachel Walsh in Marian Keyes' ground-breaking Rachel's Holiday...' Sunday Times 'Hyper current ... hugely relevant' Irish Independent Ali Jones is hell-bent on achieving her #lifegoals: 10,000+ Instagram followers and a win at the upcoming Glossie Awards. So when she inadvertently leads people to believe she's pregnant and immediately gains thousands of followers, she realises that riding the 'Mummy Influencer' wave could be her ticket to Insta-success. But then Tinder Sam, Ali's one-night-stand, resurfaces, determined to take his new role as baby daddy seriously. Elsewhere on Insta, Ireland's biggest influencer (and Ali's idol) Shelly Devine has it all -- at least on screen. But beneath the immaculately curated feed, Shelly harbours a secret from her followers -- and her husband --- but who will be the first to discover what she's been hiding? As Ali's lies spiral out of control, and Shelly starts to take a hard look at her life choices, what will it take for them to realise what's truly important before they lose what matters most? 'Written with heart and humour, Filter This peels back the social media mask so many wear as a disguise and reveals the real people beneath' Cecelia Ahern

Sophie White grew up in Dublin and has a first class honours degree in Fine Art from the National College of Art and Design. After moving to New Zealand in her early 20s, Sophie went on to train as a chef while there and worked in the French Alps for several years before returning to Dublin in 2012.Sophie began her writing career at age 27, when she started writing a weekly column 'The Domestic' for Sunday Independent's Life magazine. After the birth of her first child, she became a full-time writer, penning reviews of books and restaurants, cultural commentary and interviews for a variety of Irish publications and her first book Recipes for a Nervous Breakdown, part-memoir/part cookery book was published in 2016. Mother of Pod, the successful podcast she hosts with Jen O'Dwyer, was launched in January 2018 and they launched a second podcast, The Creep Dive, in January 2019.Sophie lives in Dublin with her husband and two sons. She is the author of two novels: Filter This and Unfiltered.