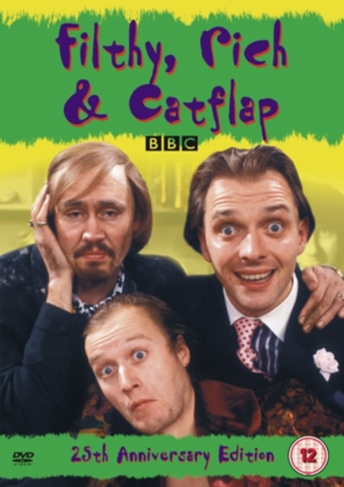 https://www.whsmith.co.uk/products/filthy-rich-and-catflap-the-complete-series/5036193030529-08-000.html £10.99
GBP
Availability
In Stock
Free Delivery Available When You Spend £25 Or More
Details
Spend £25 on eligible products to receive free standard delivery to home or free next working day click and collect to store
Share

Filthy, Rich and Catflap: The Complete Series
Written by Ben Elton and starring Rik Mayall, Adrian Edmondson and Nigel Planer, this loud, rude toilet-humour 1980s comedy was overshadowed by its predecessor, 'The Young Ones', and the later 'Bottom'. The series, of which only the six episodes collected here were ever made, takes a satirical swipe at the superficial world of showbiz. Rik Mayall plays Richie Rich, a talentless prat trying to make the big time as a superstar and international sex symbol, who, along with his useless, freeloading minder Eddie Catflap (Adrian Edmondson) and his sleazy alcoholic agent Ralph Filthy (Nigel Planer), navigates the celebrity circuit and encounters a host of parodies of real-life media darlings. Episodes are: 'Dead Milkmen', 'Game Show', 'Dinner Party', 'A Death in the Family?', 'Breakfast Television' and 'Smear Campaign'.