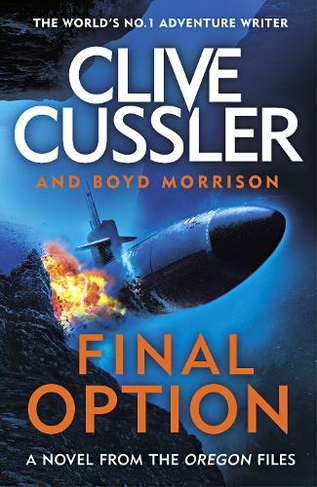 Final Option: 'The best one yet' (The Oregon Files)

THE THRILLING NEW OREGON FILES NOVEL FROM THE ADVENTURE KING CLIVE CUSSLER 'An all-out nonstop action thriller . . . the best one yet. The story hits the gas pedal and never taps the brakes' Mail Online The Oregon crew face their greatest threat - a ship as secretive and powerful as their own and an enemy from their captain's past every bit as wily and canny as Cabrillo himself . . . When the CIA realizes the identities of three American spies in Brazil have been compromised, they turn to Juan Cabrillo and the crew of the Oregon to rescue the agents. What seems like a routine operation turns out to be a trap designed by Juan Cabrillo's greatest enemy, seeking revenge. At the heart of the plot is a state-of-the-art ship that is identical to the Oregon: same weaponry, same technology, same ability to evade capture. But it doesn't have is Cabrillo and his talented crew - will they be enough to go up against the only ship that rivals their own? In this high-stakes high seas mission packed with page-turning intrigue and exhilarating suspense, Final Option proves once again that no one writes adventure like Cussler. __________ 'Cussler is hard to beat' Daily Mail 'The Adventure King' Sunday Express 'Nobody does it better . . . nobody!' Stephen Coonts 'Just about the best storyteller in the business' New York Post

Clive Cussler (Author) Clive Cussler is the author and co-author of a great number of international bestsellers, including the famous Dirk Pitt (R) adventures, such as Celtic Empire; the NUMA (R) Files adventures, most recently The Rising Sea; the Oregon Files, such as Shadow Tyrants; the Isaac Bell historical thrillers, which began with The Chase; and the recent Fargo Adventures, which lastly included The Oracle. He lives in Arizona.Boyd Morrison (Author) Boyd Morrison is the coauthor with Cussler of the Oregon Files novels Piranha, The Emperor's Revenge, Typhoon Fury, and Shadow Tyrants, and the author of four other books. He is also an actor and engineer, with a doctorate in engineering from Virginia Tech, who has worked on NASA's space station project at Johnson Space Center and developed several patents at Thomson/RCA. In 2003, he fulfilled a lifelong dream by becoming a Jeopardy! champion. He lives in Seattle.